Looks like the Gardaí out West are stuck for a few quid after this pic of three guards pushing a car back to the station was snapped in Tuam.

We all know that times are tough in the Gardaí Síochána right now, but we didn’t know how bad it was until we saw this snap of three officers pushing a car back to the station in Tuam, Co. Galway. Seeing as it’s a 2012 car, we’re going to assume/hope it ran out of fuel. 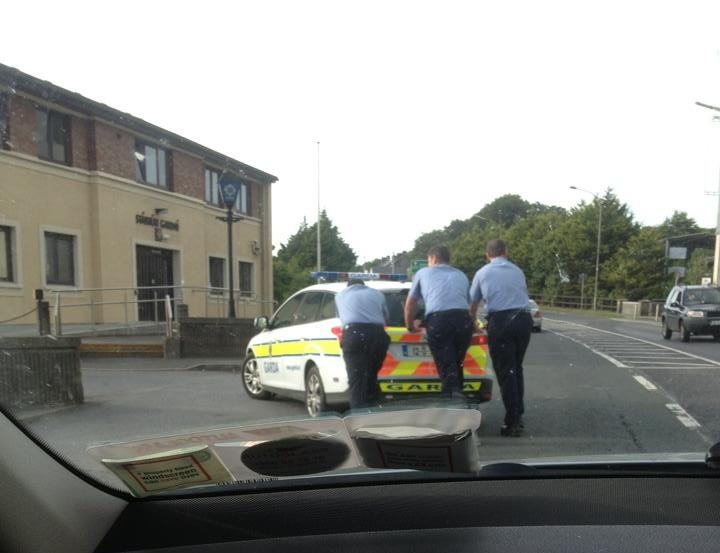 Here’s what JOE reader Brendan had to say: “An embarrassing moment for the Gardai on the N17 in Tuam having to push the patrol car back to the station! Have the cut backs affecting the Gardai got so tough they can't afford petrol? The Saw Doctors might add in a new verse to The N17 now after seeing this!”

Thanks to Brendan for sending the pic our way...

popular
QUIZ: Can you guess the crisps from the pixelated packet?
Netflix has just added 33 very big movies to its library
Six people dead after mass shooting at Fourth of July parade in Illinois
One of the coolest movies of recent years is now available to watch at home
The full list of cancelled flights in and out of Dublin Airport on Monday (so far)
The JOE Movie Quiz: Week 161
QUIZ: It's time for one of our trickiest General Knowledge Quizzes yet
You may also like
1 week ago
Taoiseach condemns "disturbing" fight at Galway v Armagh game
3 weeks ago
Drogheda and Galway inner city named as worst places in Ireland for litter
3 weeks ago
Woman in her 80s dies after falling from building in Galway
1 month ago
Galway named one of the top 10 best European cities to raise a family
1 month ago
Met Éireann issue warning for potato blight this week
1 month ago
NUI Galway temporarily restricts services following cyberattack
Next Page