Pic: Gerrard and Suarez both earn a place in WhoScored’s highest-rated European XI of the season

Mathieu Debuchy also made the cut, however, so read into that what you will.

Luis Suarez’s mantelpiece must be struggling under the weight of all the individual accolades he has collected in the last number of weeks, but he’ll have to make room for one more after he emerged as Player of the Season on the football stats site WhoScored.com.

Football aficionados are probably well aware of the highly respected and popular site as it is, but for those who aren’t, they regularly rate individual performances based on a collection of a number of performance stats, including everything from goals scored to chances created, passing completion percentages and so on.

Suarez ended up with an individual score of 8.43, the highest rated of all individual players in the top five leagues to have made 20+ appearances in the season just gone, finishing just ahead of Lionel Messi, who also posted a score of 8.4 despite a fairly mediocre season by his ridiculously high standards.

Suarez and Messi were joined by Liverpool team-mate Steven Gerrard in the WhoScored.com Highest Rated European XI, two of three Premier League representatives alongside Newcastle’s Mathieu Debuchy, with four from La Liga (including Messi and Cristiano Ronaldo), three from Serie A and one apiece from the Bundesliga and Ligue 1. 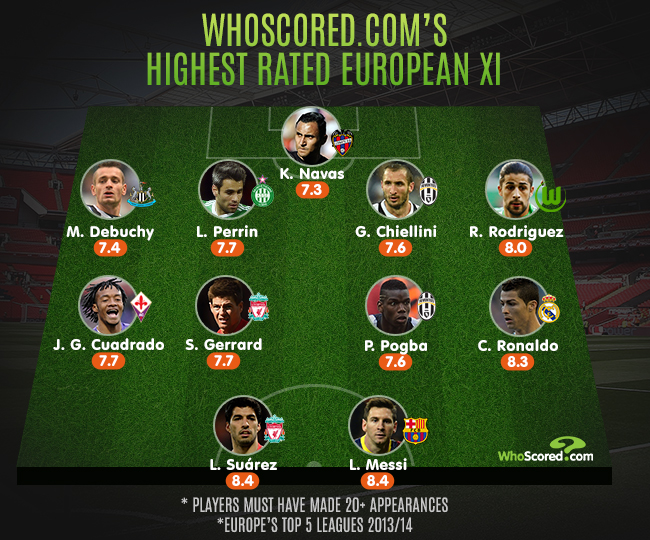 You can see a more detailed breakdown of how the respective players earned a spot in the side on the WhoScored website here but if you disagree with any of their selections, be warned that they do have A LOT of statistical information to justify the inclusion of each and every member of the XI, so your argument might have to start with a 'Stats? Schmats' opening line of debate.

popular
Bus Éireann’s service from Dublin to London will restart this week
Gardaí unveil new Armed Support Unit vehicles to replace older models
Conservative Party vice chairman resigns live on TV as Johnson administration thrown into turmoil
Rockstar Games reportedly shelving remasters of two of the best games ever made
One in two young people likely to not own a home by the time they retire
The full list of cancelled flights in and out of Dublin Airport on Monday (so far)
WATCH: Protester interrupts Good Morning Britain with 'Bye Bye Boris' song
You may also like
5 years ago
PIC: Patrice Evra pays Instagram tribute to Luis Suarez following Golden Shoe award
6 years ago
PIC: Luis Suarez left Diego Godin with a very nasty black eye during Atletico's win over Barca
6 years ago
Former Juventus and Uruguay international launches a scathing verbal attack on Luis Suarez
6 years ago
VIDEO: Mamadou Sakho introduces a very special guest at Liverpool training
6 years ago
VIDEO: Barcelona have scored one of the most beautiful penalties we've ever seen
6 years ago
VIDEO: We'd love to know what Jamie Carragher is saying to Luis Suarez as they're reunited
Next Page