Pic: Gervinho gets in touch with his feminine side sporting a dainty pair of women's shoes

It is said that fashion and style is all about taking chances, which is ironic in this case, as Gervinho rarely took chances at all, or at least he didn't during his stint at Arsenal, which will not be remembered fondly by Gunners' fans as he became a figure of ridicule to both Arsenal and opposition fans alike with his sheer inability to display actual ability on the football pitch.

He's now playing for AS Roma, who are having a fine season, positioned in second place behind runaway leaders Juventus in Serie A. Gervinho was recently spotted out on the town in Rome and while his get-up was fine for the most part, his footwear attracted a fair deal of attention. 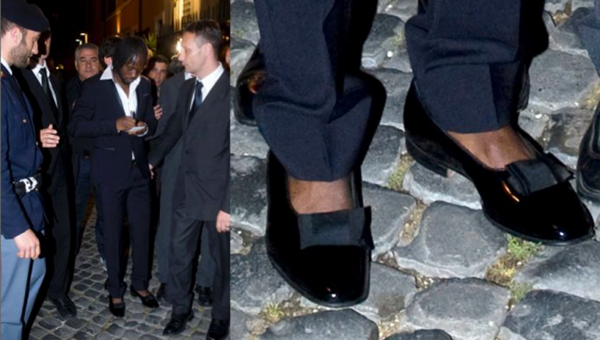 It looks like he is being arrested by the fashion police in that group shot. Perhaps he should have been. It's a big Gervinho-no-no.

The Big Reviewski || JOE · Mortal Kombat director Simon McQuoid and new Sub-Zero star Joe Taslim on fatalities and fight scenes
popular
120 person wedding party in Longford was "very disappointing", says Pavee Point Co-Director
Irish Government hits back after reports UK authorities will ban Troubles-era prosecutions of British soldiers
Darragh O'Brien says issue of investment funds buying up estates is "complex"
Benedetta is undoubtedly going to be the most controversial movie of 2021
Joe Duffy listener complains of being quoted €4,100 for three-night hotel stay in Kerry this summer
QUIZ: You won't be able to guess all these brands from their slogans
Line of Duty creator responds to fan backlash after finale outrage
You may also like
2 months ago
You can now buy high-end Stella Artois shirts, trousers and jumpers
3 months ago
Nike release first pair of hands-free runners
7 months ago
QUIZ: Do you know the names of these classic trainers?
9 months ago
New Irish fashion label seeking ‘burly’ male model to be the face of the brand
1 year ago
Aer Lingus unveil brand new uniform for flight attendants
1 year ago
Nine outfits you have definitely seen men wear on a night out in Ireland
Next Page