Pic: Just look at the size of this NBA rookie’s hands

Right, we know that NBA players are usually very big fellas, and that means that they will have bigger feet and hands than most people.

But even by the standards of the NBA, 18-year-old Milwaukee Bucks new boy Giannis Antetokounmpo has ridiculous hands.

Born in Greece, he is already rather cruelly known as ‘The Greek Freak’ and at 6’9” he is still growing.

Picked 15th in the draft by the Bucks, he has an enormous wingspan (7’3”) and has skills more normally associated with a much smaller player. He could be a real star when the new NBA season tips off.

However, why he is hitting the headlines even before the season starts is this screengrab of his hand on his face in a pre-season game. 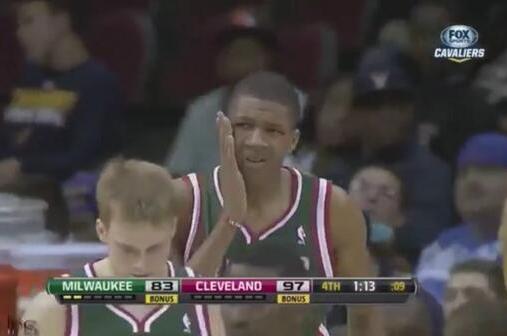 Just look at that.

A Bucks fansite also measured those enormous hands, and here’s the proof of just how big those hands are. 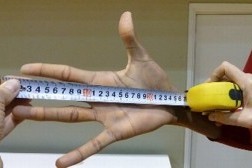 Hat-tip to Bleacher Report for the pics

House of Rugby Ireland · Quinn Roux on finding a home in Ireland and Mike McCarthy brings the absolute HEAT!
popular
The JOE Movie Quiz: Week 85
Gardaí warn of scam targeting AIB customers
A woman has died following a car accident in Dublin
QUIZ: The JOE Music Quiz: Week 41
The JOE Movie Quiz: Week 86
The JOE Friday Pub Quiz: Week 227
20 of the best comedies to watch on Netflix right now
You may also like
2 years ago
PIC: This is why you should always answer your phone when an Irish Mammy rings
3 years ago
PIC: Enda Kenny. On a Dublin Bike. In a vintage Mayo tracksuit. And a backwards cap. That is all.
4 years ago
PIC: You can almost feel this man's pain after his mates forcibly slapped his back
5 years ago
Pic: David Cameron stars in the funniest viral picture of the British election so far
6 years ago
Pic: WWE fan gets GIANT portrait of The Rock tattooed on their leg
6 years ago
Pic: Irishman snaps stunning pic of the Milky Way over Cork
Next Page