Pic: Man takes a bull horn to the balls in Pamplona

This has got to hurt…

It is a risk that thousands take every year and for the vast majority, they emerge unscathed. But the annual running of the bulls in Pamplona is a dangerous game and one guy realized just how dangerous today.

One bull managed to injure an American and two Spaniards, with the fella in the picture suffering abdominal injuries, but they are not thought to be serious. 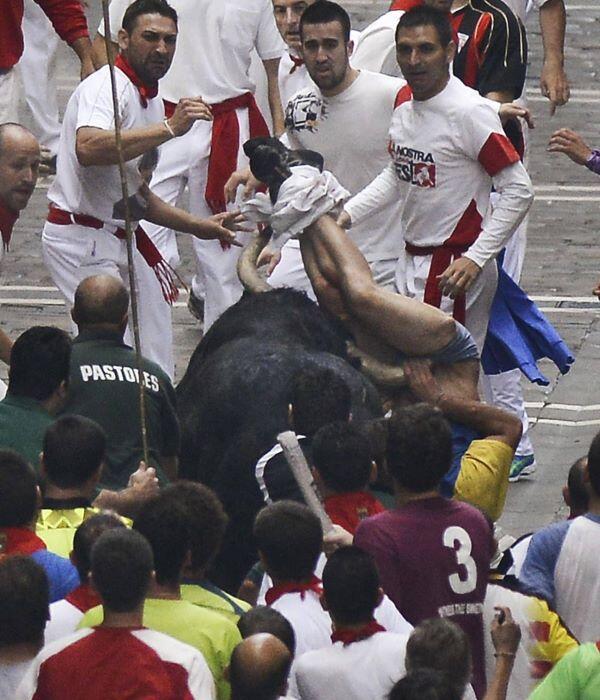 Hat-tip to @finalbossmedia for the pic.

popular
The JOE Friday Pub Quiz: Week 301
Jordan Peterson suspended from Twitter over Elliot Page comment, says he won't apologise
County where winning Lotto jackpot ticket worth over €5.5 million was sold confirmed
QUIZ: Can you name all the counties in Ireland without the letter 'A'?
Parent's Benefit Leave in Ireland is being extended from today - here's what you need to know
The 10 Best (and 5 Worst) Movies of 2022 so far
An underappreciated sci-fi blockbuster is among the movies on TV tonight
You may also like
4 years ago
PIC: This is why you should always answer your phone when an Irish Mammy rings
5 years ago
PIC: Enda Kenny. On a Dublin Bike. In a vintage Mayo tracksuit. And a backwards cap. That is all.
5 years ago
PIC: You can almost feel this man's pain after his mates forcibly slapped his back
7 years ago
Pic: David Cameron stars in the funniest viral picture of the British election so far
7 years ago
Pic: WWE fan gets GIANT portrait of The Rock tattooed on their leg
7 years ago
Pic: Irishman snaps stunning pic of the Milky Way over Cork
Next Page