Pic: One Sunderland fan probably now regrets getting this massive Paolo Di Canio tattoo on his back

Anyone have the number for a decent Tyne and Wear tattoo-removal parlour?

Following Paolo Di Canio’s dismissal as manager of Sunderland manager yesterday, one particular Black Cats fan might be feeling the pain, and pangs of regret, more than most today.

After Sunderland beat Newcastle 3-0 in the fierce North Eastern derby back in April, one passionate fan decided to mark the occasion in a completely well-thought-out-with-no-long-term-consequences-whatsoever way...

...by getting himself a huge celebratory tattoo on his back in honour of Di Canio’s memorable suit-ruining, celebratory slide.

At this point though, the unfortunate fan will have to wait until the official 'transfer' window before having it removed. 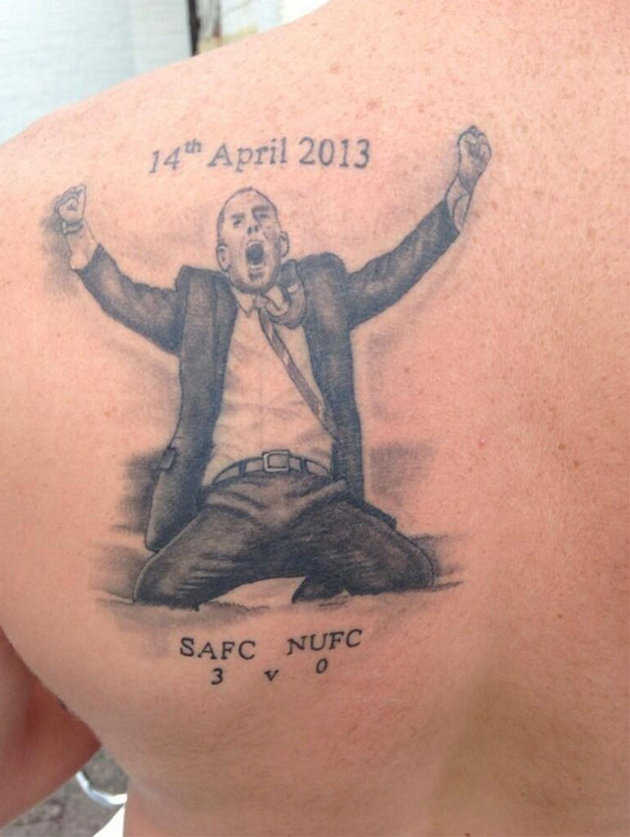 Story via Who Ate All the Pies.

The Big Reviewski || JOE · Colm Meaney & his Pixie co-stars on deadly gangster priests, Irish accents & pickled onion crisps
popular
Record Christmas bonuses worth €390 million to be paid to 1.6 million recipients next week
Larry Gogan's grandchildren pay lovely tribute to him on the radio
QUIZ: Can you guess these European countries from their outlines?
The JOE Movie Quiz: Week 80
Here’s how you can get 20 bets for €2* for the next EuroMillions jackpot
Liam Neeson to narrate landmark two-part series marking the 175th anniversary of the Great Famine
The JOE Movie Quiz: Week 79
You may also like
10 months ago
Ranking the 10 most passive-aggressive ways to end a text conversation
1 year ago
25 of the funniest tweets you might have missed in October
1 year ago
WATCH: RTÉ raised their game with their Halloween reporting on Thursday
1 year ago
PIC: Man discovers 1998 Spanish article naming part of Cork the most sexually repressed place in the world
1 year ago
Personality Test: What percent clown are you?
1 year ago
WATCH: The trailer for Season 14 of It's Always Sunny features melons, poison and laser tag
Next Page