Pic: Romelu Lukaku was looking for people to join him for 5-a-side in Spain

When you think of Premier League footballers heading to Marbella during their summer holidays, you don’t expect them to be actively engaging with your average Joes.

Many will head off after the season’s end to let off a bit of steam and relax with family and friends before the dreaded per-season kicks off in the not too distant future.

Romelu Lukaku must have been a little more bored/active than most as he was keen on a game of 5-a-side with his mates. Though they must have been short numbers as he took to Instagram to let anyone in the area when and where they were playing and to head long for a kick about with the Belgian striker and his chums. 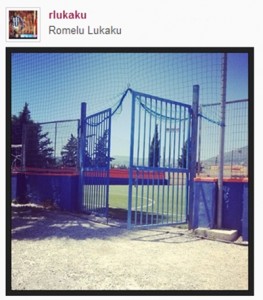 “Special announcement!!! For the ones who want to play me and my boys? We will be at this pitch at 6'o clock with my boys its in UD san pedro marbella see you there ;-)”

Considering footballers are often accused of being out of touch with their fans, it was a nice touch. Although considering the heat in Spain, we’re guessing the lads didn’t fancy running around too much either and they were glad to have the extra numbers.

popular
Irish Rail will no longer provide on-board snack options for foreseeable future
The six Eurovision countries with "irregular voting patterns" have been revealed
Eurovision producers reveal "irregular voting patterns" during Saturday night's final
Work more hours or get a better job to tackle cost of living, says UK Minister
QUIZ: Try out one of our trickiest General Knowledge Quizzes yet
REVIEW: Van Gogh Dublin is a truly unique cultural experience
One of Liam Neeson's best ever performances is among the movies on TV tonight
You may also like
9 months ago
Five football documentaries to watch to kill time before the new Premier League season
1 year ago
In an uncertain world, David Luiz provides the reassurance we all need
2 years ago
Arsenal manager Mikel Arteta tests positive for Covid-19
2 years ago
People of Cork, the Premier League roadshow is coming to town
2 years ago
They're making a cartoon show about Manchester City for some reason
2 years ago
The Coca-Cola Premier League roadshow is coming to Galway this weekend
Next Page