Pic: Roy Hodgson won't be happy when he sees the state of the pitch for England's game on Saturday

It's time to get the Miracle-Gro lads...

England and Italy are in for a bit of a shock when they see the latest picture from the Amazonia Arena in Manuas where they face each other in World Cup Group D on Saturday night.

A story in The Guardian revealed that the pitch looks far from ready, with the playing surface looking very bare and sandy with just three days to go until the game. According to the story, staff at the specially built 46,000 capacity stadium have been trying to repair the playing surface in recent months after too much fertilizer left the grass undernourished.

We're not sure what they can do between now and Saturday but the pitch looks a state... 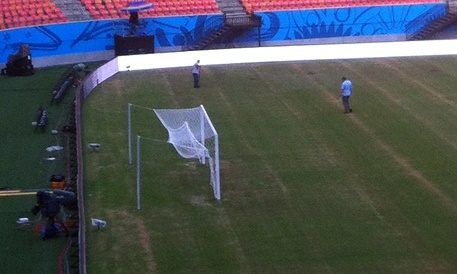 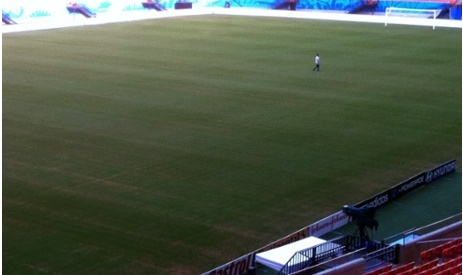 The Big Reviewski || JOE · The Big Reviewski with Y: The Last Man, that Malignant ending & a secret streaming service
popular
The JOE Friday Pub Quiz: Week 261
One of the best war films ever made is among the movies on TV tonight
The five "best places to live" in Ireland have been revealed
One of the better Liam Neeson action romps is among the movies on TV tonight
Daniel Craig says goodbye to James Bond in emotional farewell speech
QUIZ: Flex your brain definition with this general knowledge quiz
Stephen King has some amazing things to say about Netflix's new horror series
You may also like
6 years ago
Video: It's a year today since the most remarkable game of last year's World Cup
6 years ago
Opinion: The late, great Bill O'Herlihy and what made him such a national treasure
6 years ago
Video: The best showboating from this summer's World Cup in Brazil
7 years ago
Video: The Tralee man with the most famous GAA jersey at the World Cup has made a video recounting his amazing experience
7 years ago
GIFs: FIFA reveal the best goals of the 2014 World Cup
7 years ago
FIFA announce a team of the World Cup based on fan votes and it has a few issues
Next Page