Pic: Santi Cazorla and Robert Pires pose with a sign that Spurs fans won't like at all

The modern equivalent of the interview in a foreign paper that gets translated and published closer to home is the Twitter picture that ends up being shared around the world.

That fate befell Arsenal's Santi Cazorla last night. Appearing on French TV with former Arsenal star Robert Pires, the Spaniard posed for a picture while holding a sign with the words to a very well known Arsenal chant, one that is very clear on its opinion of Tottenham Hotspur.

As you might expect, Arsenal fans think it is great, Spurs fans are upset and the picture is circulating around social media faster like wildfire this morning.

We doubt there will be any serious repercussions from the picture, but we expect Cazorla to get a hot reception when he travels to White Hart Lane to play Tottenham on March 15. 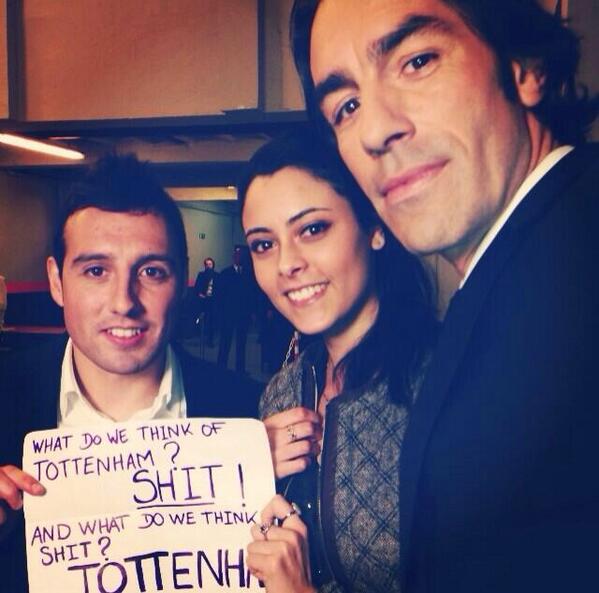 Credit to Arsenal fan @ZouMSS for the original picture

The Big Reviewski || JOE · The Big Reviewski with Andy Serkis, Squid Game follow-ups & the return of Succession
popular
An underrated Denzel Washington thriller is among the movies on TV tonight
Gardaí to target four major offences as part of clampdown on Irish roads
ESB apologise for a number of power outages, including major outage in North Dublin
"It's not Groundhog Day" – Taoiseach takes exception to reopening remark
New €140 million road officially opens today, replacing one of Ireland's most dangerous roads
Expert wants 10 antigen tests delivered each week to every family this winter
QUIZ: Can you master this General Knowledge Quiz?
You may also like
4 days ago
The return of Succession and 10 more movies and shows to watch this week
5 days ago
5 of the best 2021 movies and shows on Disney+ you might have missed
1 week ago
Alan Quinlan: Young people on social media are "suffering in silence... it's very, very dangerous"
1 week ago
A great Irish horror is among the movies on TV tonight
1 week ago
Squid Game fans spot massive clue in Tug of War game
1 week ago
COMPETITION: You're one very easy question away from winning a €200 One4All voucher
Next Page