Pic: So this is apparently Kolo Toure in Pro Evo 14

Kolo Toure may not be the player he once was, but surely he deserves better graphics on Pro Evolution 14 than this?

The Liverpool centre-half obviosuly features in the game, but we're struggling to see the resemblence between the Ivory Coast man and the graphics of the player in the game.

The facial expression and the fact he has a mop of hair mean that the real-life Kolo might struggle to pick himself out. We're certainly at a loss. 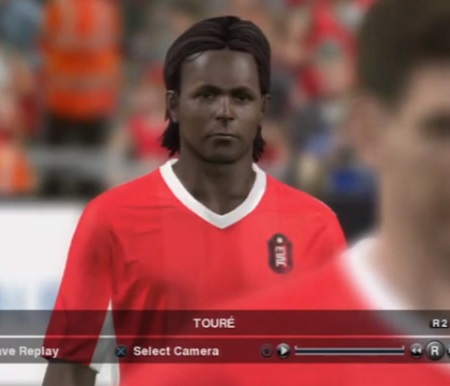 Not exactly a dead ringer

Whether the person in charge of that particular graphic was out on the town the night before or was just having the craic, we don't rightly know, but it won't go down as one of Konami's best look-a-likes.

popular
Clint Eastwood's final western is among the movies on TV tonight
The Toy Show DJ brothers have been offered their very first gig
The 50 most iconic songs of all time* have been revealed
The JOE Friday Pub Quiz: Week 271
Ryanair's "virtue signalling" claims are indicative of Ireland's view on the Irish language
PCR tests to be required for all international arrivals to the UK
One of the most shocking corporate documentaries ever made is available to watch this weekend
You may also like
1 week ago
Police issue warning over CCTV footage of Liverpool bomb explosion
1 week ago
Liverpool bomb declared a terrorist attack as police confirm fourth arrest
1 week ago
Liverpool bomb: Taxi driver "locked bomber inside car" after spotting explosives (Report)
1 year ago
Gini Wijnaldum shares his favourite gym exercises for building abs of steel
1 year ago
Armed police close gym near Liverpool after owner refused to shut doors
1 year ago
Jurgen Klopp sends brilliant letter to 10-year-old Manchester United fan from Donegal asking him to stop winning
Next Page