Pic: The Class of '92 team for tonight's Salford City match is all kinds of nostalgic

...and then they go and spoil it all by saying something stupid like 'Robbie Savage.'

The Class of '92 teamsheet for tonight's money-spinning friendly against Salford City FC has been released, featuring such exalted names as Butt, Giggs, Scholes, Neville and Neville.

Robbie Savage manages to bluff his way into the team, while other luminaries such as Quinton Fortune, Raimond van der Gouw (who's 51 now, somehow), John O'Kane and Raphael Burke also take to the pitch.

The subs bench is a mish-mash of celebrities and never weres, with the likes of Ben Thornley, Jack Whitehall, Michael Vaughan, Thomas Kuszczak and former World Player of the Year David May all basking in the Salford sunshine. 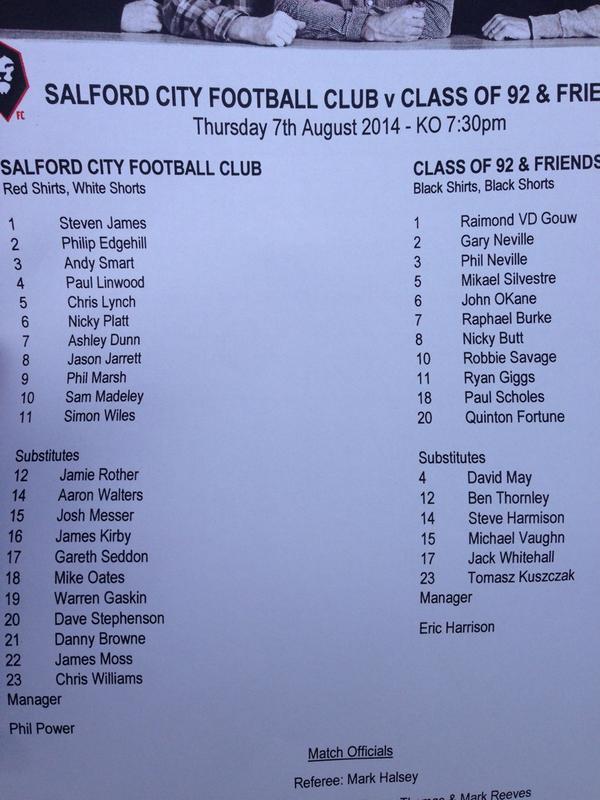 The Big Reviewski || JOE · The Big Reviewski with Dune, a mini-Hangover reunion & the best of Timothée Chalamet
popular
HBO announces a new Sopranos series is in the works... kind of
QUIZ: Can you name all the countries beginning with L?
CONFIRMED: Nightclubs to open at 100% capacity, 11.30pm curfew has been removed
"It’s obvious these guidelines were issued by Government without any meaningful consultation with the hospitality sector."
Here's the lineup for this week's Late Late Show
Two Gardaí assaulted during protest in Dublin City Centre
The cast of Succession on shooting the next season in Ireland
You may also like
5 months ago
COMPETITION: WIN a copy of Eric Cantona's new Manchester United documentary, The United Way, on DVD
6 months ago
Manchester United documentary written by Eric Cantona available to watch at home in Ireland this May
11 months ago
Marcus Rashford launches book club to help kids experience 'escapism' of reading
11 months ago
Paul Pogba releases powerful statement in response to 'fake news' from The Sun
11 months ago
The JOE Pub Quiz: Week 214
1 year ago
Harry Maguire gives his version of events in Mykonos in TV interview
Next Page