Pic: The Irish lad injured in the Pamplona bull run puts a brave face on it in hospital

As we said last week, the annual bull running festival in Pamplona is a dangerous business. For many it is a bit of harmless fun but if you get caught in the wrong place, at the wrong time, then something bad can happen.

Dub Robbie Thackaberry was that unlucky sod on Saturday. Doing the bull run as part of a mate’s stag, Robbie was caught in a pile-up near the entrance to the bull ring and it was reported on Saturday that he suffered ‘serious’ injuries in the crush.

Luckily, and somewhat miraculously, the engineer suffered no broken bones or internal damage and according to today’s Irish Independent he should get the all clear from the doctors today and fly home with the rest of the gang who travelled to Spain.

At least he is able to smile about it, as this picture on his Facebook page shows. 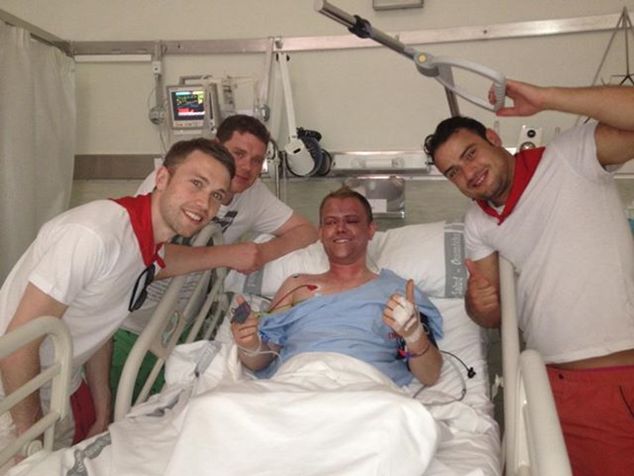 popular
County where winning Lotto jackpot ticket worth over €5.5 million was sold confirmed
Jordan Peterson suspended from Twitter over Elliot Page comment, says he won't apologise
The JOE Friday Pub Quiz: Week 301
Parent's Benefit Leave in Ireland is being extended from today - here's what you need to know
One of the best sports movies of recent years is now available to stream at home
The full list of cancelled flights in and out of Dublin Airport on Friday (so far)
QUIZ: Can you name all the counties in Ireland without the letter 'A'?
You may also like
4 years ago
PIC: This is why you should always answer your phone when an Irish Mammy rings
5 years ago
PIC: Enda Kenny. On a Dublin Bike. In a vintage Mayo tracksuit. And a backwards cap. That is all.
5 years ago
PIC: You can almost feel this man's pain after his mates forcibly slapped his back
7 years ago
Pic: David Cameron stars in the funniest viral picture of the British election so far
7 years ago
Pic: WWE fan gets GIANT portrait of The Rock tattooed on their leg
7 years ago
Pic: Irishman snaps stunning pic of the Milky Way over Cork
Next Page