Pic: This Brazilian team’s shirt with Che Guevara’s face on it is pretty cool

Most of us, at one stage or another, had a Che Guevara t-shirt or poster. Hell, any Rage Against The Machine fan worth their salt simply had to have at least one item of their Che-inspired clothing.

The most famous image of Guevara, and the one most often used in many, many forms over the years, is a 1968 caricature by Irish artist Jim Fitzpatrick of an Alberto Korda photograph, taken in 1960.

That very recognisable image has appeared everywhere from Diego Maradona’s arm to Call of Duty; Black Ops, but we think this is the first time it has appeared on a  football jersey.

According to the Mirror, Brazilian third division side Madureira decided to celebrate the 50th anniversary of a club tour to Cuba in 1963 with a special shirt, one with the famous Che image on it. 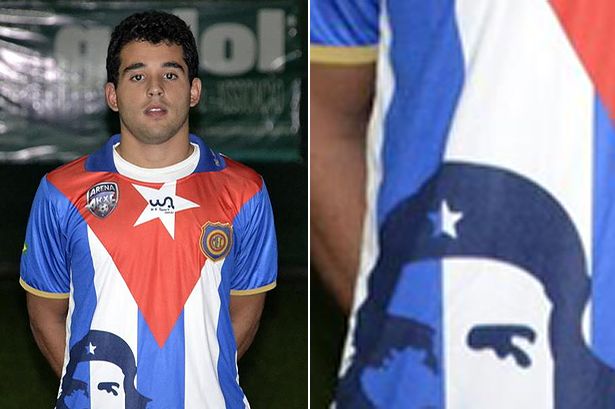 The shirt, which also incorporates the Cuban flag, is selling fast, and we fully expect to see one on the streets of Dublin real soon.

popular
Jordan Peterson suspended from Twitter over Elliot Page comment, says he won't apologise
County where winning Lotto jackpot ticket worth over €5.5 million was sold confirmed
Gardener and broadcaster Dermot O'Neill has died aged 58
The JOE Friday Pub Quiz: Week 301
Landlords must give longer eviction notice periods under newly passed legislation
QUIZ: How well do you know your Irish history?
QUIZ: Can you get 100% in JOE's great big halfway through 2022 quiz?
You may also like
7 months ago
Galway castle makes list of weirdest Airbnbs in the world
1 year ago
Watch the official trailer for Netflix's hotly anticipated Pelé documentary
2 years ago
Brazil's President seems to accuse Leonardo DiCaprio of starting the Amazon fires
2 years ago
Brazil has rejected the $20 million aid offered by G7 leaders to fight Amazon fires
2 years ago
Brazilian president to send army to fight Amazon fire
2 years ago
Bus hijacker shot dead by police in Brazil
Next Page