Pic: This is what it looks like if an angle grinder runs into your stomach (Graphic Content)

One Brazilian man was just chopping some wood when something terrible happened. Luckily he survived to tell the tale.

We wouldn’t have recommended cutting wood with an angle grinder before and we definitely won’t be recommending it now.

Brazilian farmer Gregory Steinmedc was doing his thing when the power tool slipped and lodged itself 10cm into his stomach. Amazingly it didn’t cut through anything vital and after his wife Frida did some quick first aid and got him to the nearest hospital, Gregory lived to tell the tale. 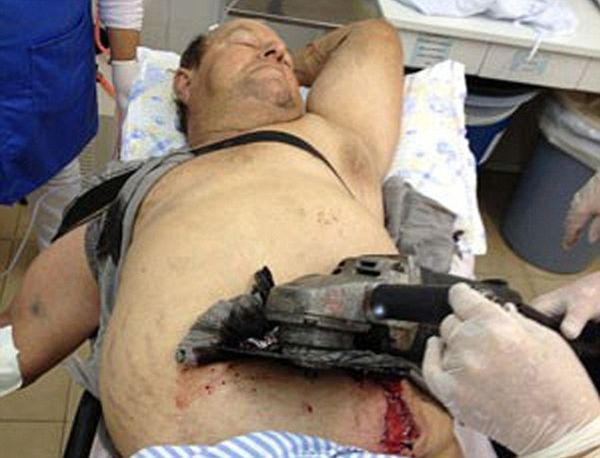 The smartest thing Frida did was leave the saw in as it could have caused a hemorrhage and the doctors in Santa Rosa praised her for saving her husband’s life.

And Gregory won’t be going near an angle grinder, or anything like that for that matter, anytime soon.

"Never again. That I swear and I stand by that. I will not use them anymore. I can see that it is dangerous," he is quoted as saying in The Sun.

popular
The JOE Friday Pub Quiz: Week 308
Fine Gael announces special screenings of Michael Collins movie in 19 cinemas across Ireland
Controversial influencer Andrew Tate banned from Instagram and Facebook
Netflix has just added 23 very big movies to its library
Infant dies after being hit by jeep in Roscommon
Pilots fly over destination airport at 37,000 feet because they were both sleeping
Passenger plane dropped 1,200 feet in a minute without pilots noticing
You may also like
4 years ago
Horrific tackle by two U-20 French players against English opponent results in double red card
4 years ago
These four tips will stop you getting neck pain from looking at a screen
4 years ago
Blake Lively's spy thriller put on hold after she injures herself while filming in Dublin
5 years ago
PIC: Cork fella suffers gruesome-looking eye injury during football game
5 years ago
A fitness expert reveals the five exercises every sportsperson should be doing
5 years ago
PICS: Soccer player suffers hideously dislocated knee in Tipperary, teammates help by immediately taking selfie
Next Page