Pic: Wolves fan complains to club about upside down crest on shirt, gets brilliant upside down letter in reply

A Wolves fan called Richard Gough was not best pleased when he ordered a new replice strip online, only for it to arrive at his house with the crest ironed on upside down.

He tweeted his dismay at the club via Twitter yesterday.

@OfficialWolves my new shirt just delivered.....can you see the error? Is this why theyre 12quid at moment? Shite pic.twitter.com/ZebRRpm5sc

And the club duly replied, with this brilliant letter

The letter contains a few very clever lines too, so it is well worth your while twisting your head to have a read but as we love you dear JOE reader, here's a flipped version so you don't end up doing yourself an injury. 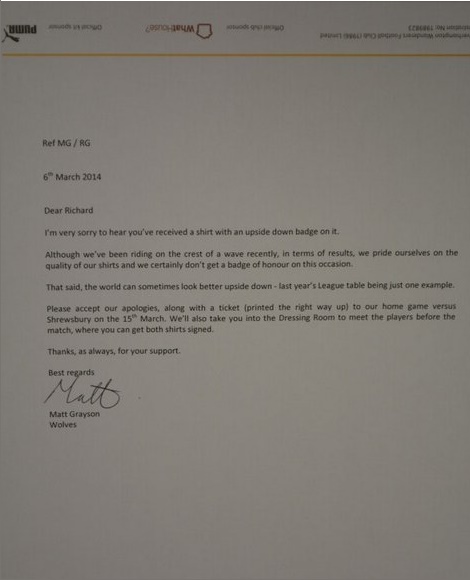 popular
Gardaí unveil new Armed Support Unit vehicles to replace older models
Netflix has just added 33 very big movies to its library
The full list of cancelled flights in and out of Dublin Airport on Monday (so far)
One of the greatest crime movies of all time could be getting a sequel
Amazon Prime Video has just added 51 big movies to its library
Increase in passenger charges at Dublin Airport may be on the way
An action-packed thriller is among the movies on TV tonight
You may also like
1 week ago
The Chase star Bradley Walsh can't control his laughter after the most NSFW answer ever
2 weeks ago
WATCH: Lightyear star reveals who'd win in a fight between him and Thanos
2 weeks ago
30 years on, The Simpsons writer confesses he misunderstood iconic joke
4 months ago
30 years ago, Arnie's biggest prank ended with Stallone's biggest flop
5 months ago
China gives Fight Club a new ending, manages to completely change the plot of the movie
7 months ago
Who tweeted it: Simu Liu or Rahul Kohli?
Next Page