This is an incredible picture of Real Madrid midfielder Xabi Alonso celebrating a goal for his team against Barcelona by appearing to float in mid air.

We loved the latest instalment of El Clasico between Real Madrid and Barcelona which finished 4-3 in the Catalan's favour. When Real Madrid scored their third goal on Sunday night against Barca, they celebrated wildly as expected. In this excellent Getty snap, Xabi Alonso appears to hover over to his team-mates on what could be an invisible jet-pack. Or an invisible horse. 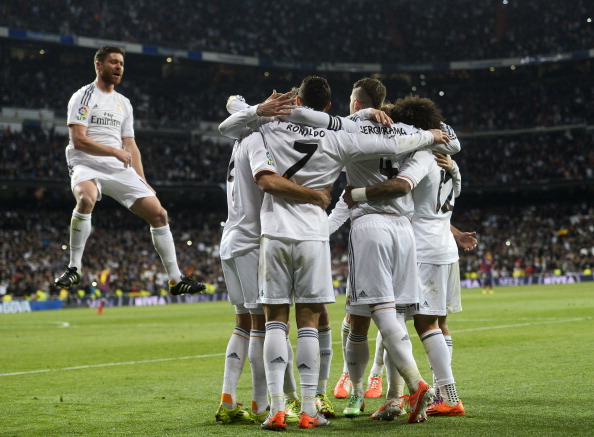 There have been rumours that Alonso is set for a return to the Premier League, but with this hanging in the air ability, he's bound to be offered a lucrative NBA contract with someone. If ever a picture deserved a caption, surely this is it?

Do your worst internet.

House of Rugby Ireland · Quinn Roux on finding a home in Ireland and Mike McCarthy brings the absolute HEAT!
popular
The JOE Movie Quiz: Week 86
Man arrested after ramming Garda car in Donegal
Majority of English people 'pleased' or 'not bothered' by prospect of united Ireland
Ireland adores Leitrim hurler Zak Moradi on Tommy Tiernan show
Gardaí warn of scam targeting AIB customers
Gardaí uncover functioning shebeen in Swords
The JOE Movie Quiz: Week 85
You may also like
7 months ago
In an uncertain world, David Luiz provides the reassurance we all need
10 months ago
Arsenal manager Mikel Arteta tests positive for Covid-19
1 year ago
People of Cork, the Premier League roadshow is coming to town
1 year ago
They're making a cartoon show about Manchester City for some reason
1 year ago
The Coca-Cola Premier League roadshow is coming to Galway this weekend
1 year ago
Coca Cola's first Premier League roadshow kicks off in Belfast this Monday
Next Page