The world was shocked just a few days ago when it was announced that Michael Schumacher had suffered serious injuries as a result of a skiing accident, and fans around the world have had him in their thoughts since the terrible news broke.

Today, his fellow Germans and the rest of the Arsenal squad were wishing him all the best for his recovery and hoping that he can pull through. 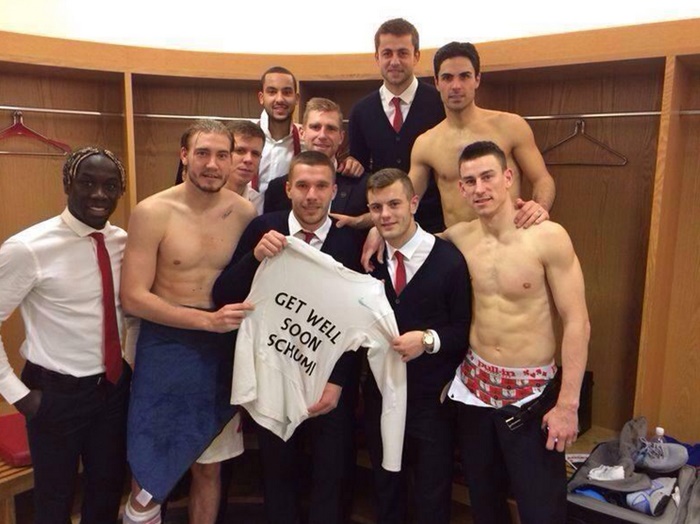 Schumacher remains in a critical condition in hospital, but is stable, while according to NBC News, he has shown some signs of slight improvement.

popular
QUIZ: Can you get top marks in this short but tricky Irish geography quiz?
4-year-old girl killed in Sligo caravan park named as Alice Dunleavy
Two long-thought-dead Marvel projects appear to be in the works
Family of Ashling Murphy share heartbreaking tribute at Fleadh Cheoil
QUIZ: Can you name all the counties in Ireland with an ‘N’ in their name?
QUIZ: Can you score 12/15 in this difficult General Knowledge Quiz?
The JOE Friday Pub Quiz: Week 306
You may also like
8 years ago
Transfer Talk: Alexis Sanchez to Liverpool and Phil Jones' face to Chelsea, anyone?
8 years ago
Transfer Talk: Suarez staying put, Sagna to City and Luis van Gaal is after half of Bayern for United
8 years ago
Pic: Has Linford Christie shown the world what Arsenal’s new PUMA kit will look like?
5 years ago
WATCH: This video showing 'hand-rolled ice cream' in Dublin is mesmerising
5 years ago
There's a new app that helps people find any food, drink or product they're looking for, locally
6 years ago
5 reasons why your business should 'pop-up' at one of Dublin's busiest stations
Next Page