Picture: Here's the team of the season according to Gary Neville and Jamie Carragher

So do you agree with their selection?

The lads on Monday NIght Football have been entertaining us with their punditry all season, and last night they put their heads together to come up with their best XI from the season.

No surprise with Carragher on the panel that the team features plenty of players from Liverpool feature in the form of Gerrard, Sterling, Sturridge and Suarez, but there were a few selections that you might not have expected either.

Our own Seamus Coleman makes it in (too right, in JOE's humble opinion) as does David Marshall from Cardiff and Luke Shaw of Southampton. Here's the team in full: 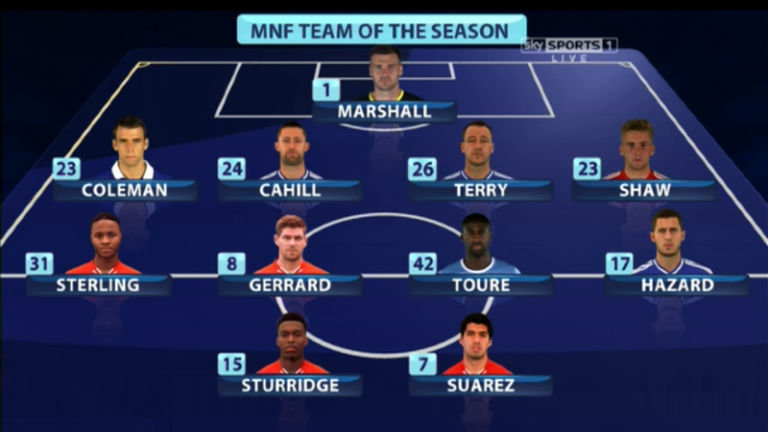 The two lads agreed on eight of the players to feature in their dream team, but turned to Twitter and the viewers to decide who should play in goal, at left-back and on the right-hand side of midfield. So what do you reckon? Do you agree with their selections?

We're sure it must have been a grueling process narrowing down the list of candidates, but somehow we don't think they chose their team in this fashion:

popular
"You're both to blame." Pearse Doherty tears into Fianna Fáil and Fine Gael over housing crisis
Here are the best movies on TV this evening
Simon Harris condemns "downright stupid" comments about student PUP payments
New RTÉ series to celebrate The Commitments, The Snapper and The Van 30 years on
120 person wedding party in Longford was "very disappointing", says Pavee Point Co-Director
Eight more people with Covid-19 have died in Ireland, 393 new cases
Cillian Murphy looks terrified in the final trailer for A Quiet Place Part II
You may also like
1 year ago
Monday Night Football returns with some classic Premier League games
2 years ago
Sky confirms every televised Premier League game will be available under one subscription from next season
2 years ago
Brian Carney gives Sky Sports presenter a "geography and sovereignty lesson"
2 years ago
Alex Scott is a quality pundit, and she's being criticised purely because she is a woman
2 years ago
Roy Keane admits "it could have been 4 or 5" as United are completely outclassed by Liverpool
2 years ago
Sky Sports announce huge deal to broadcast the NBA starting on Wednesday
Next Page