Picture: Robbie Keane brought cousin Morrissey along to the Aviva this evening

Robbie Keane won’t be playing at the Aviva Stadium this evening but he’ll be watching the game in interesting company having brought along a famous cousin of his as a guest.

The revelation that Morrissey is in fact Robbie’s cousin is undoubtedly our favourite football story of the year so far and the pair must have really hit it off after their last meeting in LA as Keane brought the former frontman of The Smiths along to take in the Austria game this evening. 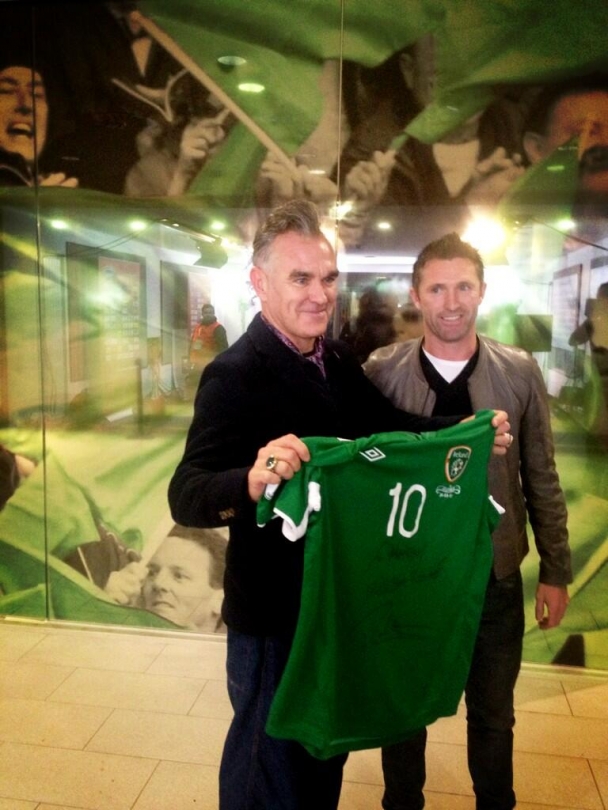 Unfortunately, Morrissey won’t get to see Robbie “pacing like a lion, and as weightless as an astronaut” as he described him in his own words, but at least if he’s going out tonight he won’t have to worry about not having a stitch to wear because Robbie gave him a jersey as a memento for the evening.

Let's hope Morrissey proves to be a good omen, but if not, there will be no one better to write a musical lament about what would be a devastating defeat.

popular
One of the best action movies of recent years is finally available to watch at home
The JOE Movie Quiz: Week 138
Woman hospitalised following stag attack in Kerry
QUIZ: Give this General Knowledge Quiz a whirl
Gardaí appealing for witnesses in relation to alleged assaults in Sligo
QUIZ: Can you name every Batman actor in three minutes?
The JOE Friday Pub Quiz: Week 278
You may also like
5 years ago
WATCH: This video showing 'hand-rolled ice cream' in Dublin is mesmerising
5 years ago
There's a new app that helps people find any food, drink or product they're looking for, locally
5 years ago
5 reasons why your business should 'pop-up' at one of Dublin's busiest stations
5 years ago
JOE BUSINESS: 3 great reasons you should pop-up in Dun Laoghaire this summer
5 years ago
This new app will help you keep track of the Luas strikes
5 years ago
TWEETS: Mixed reaction as Joan Burton steps down as leader of the Labour party
Next Page