Two teams, two managers, 22 players, one amazing match. And that's just the start of it.

Are you looking forward to this evening’s Champions League Final as much as we are? Good. Are you, like us, looking to digest as much information as your brain can manage about the two teams as possible before kick-off? We thought as much.

We’ve had a filter through some important and some not so important but still interesting stats ahead of the all-Madrid final in Lisbon so if numbers are your thing, or you’re just looking for a way to appear super-intelligent and knowledgeable in front of your mates down the pub, then these will be right up your street.

£35 million – The price Atletico Madrid paid for their most expensive signing, Radamel Falcao, who they subsequently made a £16 million profit on when selling him to Monaco two years later.

£9.7 million – The price paid for the most expensive member of the Atletico starting XI that took on Chelsea in the second leg of the Champions League Final. It was Arda Turan.

At least 10 – Number of times you can expect to hear reference to how little Atletico Madrid spent to assemble their current squad in commentary when watching the match. We shouldn’t really mock that figure though, as the job Diego Simeone has done to be able to compete with the top two in Spain with far less resources is pretty amazing.

1 – Smooth bastard on the touchline. That would be Simeone again. I mean, come on… 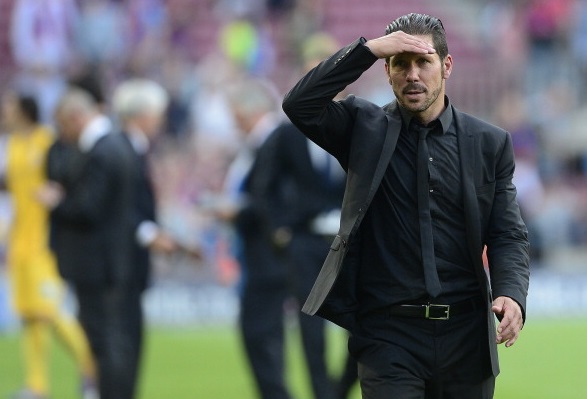 Is that fashion perfection you're looking for Diego? Don't worry, you've found it.

10 – Number of European Cup titles that Real Madrid will have won if they triumph tonight. You probably knew that, in fairness, what with all the talk of ‘La Decima’ building up to the big match.

27 – Number of fouls committed by Atletico Madrid’s Gabi in the competition so far, the highest individual tally (along with Chelsea’s Ramires) this season. Raul Garcia is next on 26. Watch out Cristiano!

€1,555 – What it will cost for one night in Lisbon’s Hotel Capital on Saturday night according to Hotels.com, where it has been given just the one star. Fancy.

132922 – The number of metres Koke of Atletico Madrid has covered in the Champions League this season. That’s nearly 133km in total, or around 30 kilometres short of the distance from Dublin to Belfast. And in just over 16 hours of football. Not bad going at all. Koke is second to Bayern Munich’s David Alaba, who has covered nearly five kilometres more, while Real Madrid’s biggest lung-buster is, perhaps surprisingly, Pepe, who has covered just under 109 kilometres so far.

737 – The number of passes attempted by Luka Modric in this season’s Champions League, the highest number of any player on both teams. He has completed 623 for a pass completion percentage of 85%. Incidentally, six of the seven players to have attempted the most passes come from Bayern Munich or Barcelona.

2 – Of the finest beards in football will be on display tomorrow night; Arda Turan’s and Xabi Alonso’s (s0mewhere in the stands because, unfortunately, he's suspended). Special mention, too, must go to Sergio Ramos, while Alvaro Arbeloa has been cultivating a decent one of late too. David Villa and Adrian probably belong in the designer stubble category but they’re getting there...

65, 647 – The capacity of the Estadio de Luz in Lisbon, where tonight’s game will be played.

43 – The number of attempts Cristiano Ronaldo has had on target during this season’s competition. He’s also had 21 off-target. Arjen Robben comes closest in terms of attempts on target with 30, while the nearest Atletico challenger is Diego Costa on 19.

1 – Amazing game. We really hope this one lives up to expectations because if it does it will be an absolute belter.

House of Rugby Ireland · Quinn Roux on finding a home in Ireland and Mike McCarthy brings the absolute HEAT!
popular
20 of the best comedies to watch on Netflix right now
The JOE Friday Pub Quiz: Week 227
The 50 most iconic songs of all time* have been revealed
The JOE Movie Quiz: Week 85
QUIZ: The JOE Music Quiz: Week 41
Yewande Biala releases statement discussing racism on Love Island
PICS: The man with the biggest penis in the world has one unbelievable problem with it
You may also like
1 year ago
QUIZ: How well do you remember Zinedine Zidane's playing career?
2 years ago
Mesut Özil hits out at "right-wing propaganda" in Germany following criticism for meeting Turkish President
2 years ago
Cristiano Ronaldo proves why he’s one of the greatest with late free-kick equaliser
2 years ago
Liverpool goalkeeper Loris Karius writes emotional apology to fans
2 years ago
Gary Neville has really twisted the knife into Liverpool's Champions League defeat
2 years ago
Gareth Bale's breathtaking volley somehow tops Karius' catastrophic clangers
Next Page