Sundae Supplement: Would Roo believe who wants to leave Old Trafford and Arsenal have a big-money target

Wayne Rooney may have had a hand in United’s victory over Swansea, but even the dog on the street could tell he didn’t look like a happy camper.

After being sprung from the bench, Rooney played his part with the second-half goals, though his body language seemed to indicate a man not entirely happy with his lot. Not that we have a Degree in psychology of course, but the transfer rumours were only further fuelled and the papers haven’t disappointed this morning.

The Sunday Times say that Chelski will cough up £40 million and offer £300,000 a week to get their man, despite the assurances from the Red Devils that he is not for sale at any price. That is indeed some cough, they may need to check that out.

A number of others are suggesting that while Stamford Bridge is his preferred destination, Arsenal is his ‘contingency’ plan. Not sure if Wazza saw what happened at the Emirates yesterday, or indeed if the Gunners would be happy to be a fall-back option.

The papers seem to be focusing more on players Moyes will be bringing in rather than shipping out, with Mundo Deportivo claiming a double raid on Real Madrid is on the cards, with Mesut Ozil and Kaka linked to the Premier League champions. The Sunday Mirror is again saying that Marouane Fellaini is a top of the shopping list, though his release clause has now expired.

With the financial shi* hitting the fan at Anzhi, Samuel Eto’o has emerged as target for his former club Inter Milan (Daily Star). The Cameroonian was though to be on Jose Mourinho’s wish-list, but could face competition from his former club. Willian is still being courted by Tottenham (Sunday People), despite only recently shelling out for Soldado. 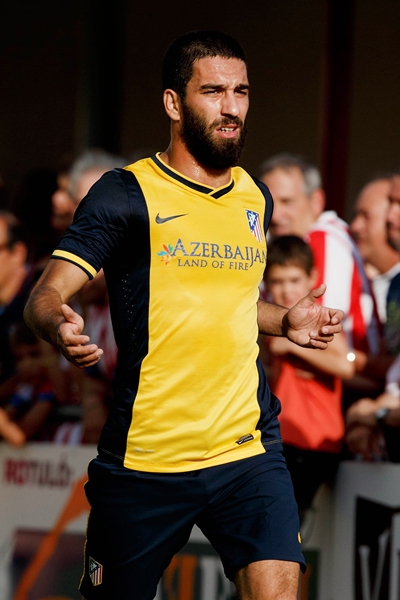 Arda Turan could be playing in England sooner rather than later

AS is Spain says that Atletico Madrid’s highly-rated Arda Turan could be set for a move to England. The playmaker has caught the attention of Liverpool and Arsenal, and the 26 year-old’s agent has said that a move to the Premier League is “probable”. Please, don’t give too much away.

Arsenal had a miserable start to the campaign yesterday and there has been widespread clamour for Arsene Wenger to dispense with his ‘short hands, deep pockets’ approach. Should he want to bring Swansea striker Michu to the Emirates, as the Sunday Mirror claim, he will have to part with £25 million, while Micah Richards is also on the radar.

Time will tell if Wenger does put a serious dent on the coffers in North London.

Today is the first Sunday of the Premier League season, so the last place we want to be is in the kitchen when we could be watching sports on the TV. Don't worry though, let the lads at Supermacs look after all the grub, they've even sorted you out a discount. Just click on the logo below.

popular
Wrestling legend Hulk Hogan 'paralysed from the waist down'
Police special operations unit seize mother's e-scooter after she took child to school on it
Omniplex Cinemas are hiring for an awesome and very rare job
Prime Video has just added one of the best dramas of the last decade
Richard Madeley apologises after calling Sam Smith 'he' and bungling guest's pronouns
An extremely tense true crime drama is among the movies on TV tonight
Parents left in shock after gorillas start mating in front of kids at zoo
You may also like
2 months ago
Will Ferrell is looking for someone to put him and his mum up in Liverpool
5 months ago
Nine-year-old girl shot dead in Liverpool
8 months ago
Merseyside police defend ‘exemplary’ Liverpool fans tear gassed by French police
1 year ago
Police issue warning over CCTV footage of Liverpool bomb explosion
1 year ago
Liverpool bomb declared a terrorist attack as police confirm fourth arrest
1 year ago
Liverpool bomb: Taxi driver "locked bomber inside car" after spotting explosives (Report)
Next Page