Last time I checked, both hurling and Gaelic football were amateur sports. Then why, exactly, are inter-county teams treated without democracy at times? Managers and players, GAA and GPA officials - all have mixed views on the training ban for November and December.

JOE spoke to GAA insiders to find out about possible solutions, player burn-out and the truth behind their expenses at this time of year.

â€œIâ€™ve no problem with it at all,â€ says Mayo star Keith Higgins.

Hereâ€™s a player who, at the age of 25, has taken to the pitch enough times to regale tales akin to a veteran. Higgins doubles up for the Green and Red in both codes - hurling and football - at senior inter-county level and, clearly, he welcomes the opportunity to catch his breath at this time of year.

â€œThe year is going to be long enough most of the time anyway.

â€œIf you go training this time of year then by February or March youâ€™re nearly sick of it. But I can see where managers are coming from at the same time.â€

Indeed, managers are the ones who feel most aggrieved over the two-month ban on collective training - a decision implemented by the GAA in 2007 to alleviate player burn-out.

Possibly still wounded from the most controversial goal that should not have been allowed in this yearâ€™s Leinster SFC final, Louth manager Peter Fitzpatrick feels that the GAA have it all wrong.

â€œI think itâ€™s a bit of a disaster at the moment,â€ says the Wee county manager.

â€œWe played our last game in the championship in July so that means five months there youâ€™re not going to see your players. Even if you could do one night a week it would help.â€

The astute manager also highlights a spin-off result that may have been overlooked by the honchos at GAA headquarters. Players obviously want and need to stay fit and time spent in the gym can become monotonous. Togging out for rugby and soccer teams during the closed GAA season is something that Fitzpatrick doesnâ€™t like to see, for obvious reasons.

â€œItâ€™s an amateur sport and people shouldnâ€™t be able to dictate to people and say, â€˜you canâ€™t do November and Decemberâ€™. People should be entitled to do what they want to do.â€

â€œYouâ€™re also giving guys an opportunity to go away and play rugby or soccer - sports theyâ€™re more inclined to get injured playing in.â€

â€œIt should be optional. The managers should be able to discuss with the county board what happens in the close season.â€

Footballers and hurlers from the successful counties are the beneficiaries of the collective training break. Sure, most of them have to return to club action after they leave the dizzy heights of glorious September Sundays in Croke Park, but their unofficial break away from action is usually incorporated. 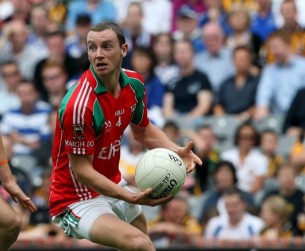 Keith Higgins in action for Mayo

The Gaelic Playerâ€™s Association (GPA) have conducted research with their members on the issue which finds that the majority want the closed season to be more flexible. Thereâ€™s no doubting the scientific issue of player burn-out â€“ nobody is glorifying that or saying it doesnâ€™t need to be taken into account â€“ but the signals coming from the organisation is that an alteration to the current system is needed.

â€œWe (the GPA) agree that there should be a closed season. It makes sense, and we take our lead from the experts in this regard.

â€œThe problem with the fixed ban over the two-month period is it doesnâ€™t suit a system that doesnâ€™t have a defined season. Players from Cork who are involved late in the championship are obviously busy playing most of the year but it wouldnâ€™t necessarily suit teams that exited the championship in July who would rather get back as early as possible.â€

The issue of playersâ€™ expenses has been raised from various quarters and the stance on the matter for the closed season is firmly with every individual county board in the country. Potts says some players feel the ban on collective training is â€œa cynical move (by county boards) to save on expenses and they donâ€™t see it as the burn-out issueâ€ but that itâ€™s not a given that â€œthe sentiment behind what the GAA are trying to do is genuine.â€

So what exactly is the plan of action for the GPA on the matter? Weâ€™ve all seen the power-bending capabilities the body can use to good effect at times. Potts says an adjustment to the current format is needed â€“ an adjustment that makes a hell of a lot of sense.

â€œWeâ€™ll review the flexibility arrangements of it all - if teams want to take the option of having their close season immediately after their season is finished in July and return to training in November or December and start building a squad. Especially teams in the middle-tier.â€

Meanwile, the GAA remain rooted on the ban on training at this time of year. It's clear that directives need to come from county boards via proposals at county conventions. As of yet there have been no confirmed reports of inter-county players training collectively when they shouldn't be.

A communications representative for the GAA told JOE.ie that â€œplayers are free to train individually but it is there for playerâ€™s welfare and that position is as it is for the momentâ€.

The Big Reviewski || JOE · The Big Reviewski with Ray Liotta, Goodfellas facts & Tom Hanks making us cry
popular
EU lorry drivers vow not to help UK get “out of the s**t they created themselves”
Netflix has just added arguably the very worst movie of the last decade
Four major employers join forces to create Ireland’s first remote working alliance
Up to 90% of petrol stations in the UK have run dry
Gardaí appealing for witnesses after body of man in his 20s found in Dublin's Grand Canal
Here’s what graduates from Irish colleges can expect to earn in the workplace
An Oscar-worthy Margot Robbie performance is among the movies on TV tonight
You may also like
5 years ago
WATCH: This video showing 'hand-rolled ice cream' in Dublin is mesmerising
5 years ago
There's a new app that helps people find any food, drink or product they're looking for, locally
5 years ago
5 reasons why your business should 'pop-up' at one of Dublin's busiest stations
5 years ago
JOE BUSINESS: 3 great reasons you should pop-up in Dun Laoghaire this summer
5 years ago
This new app will help you keep track of the Luas strikes
5 years ago
TWEETS: Mixed reaction as Joan Burton steps down as leader of the Labour party
Next Page