It’s not too often that an official club website will take the piss out of themselves, so for that alone, Torquay United we salute you.

Ordinarily the signing of 23 year-old central defender Krystian Perace on a two-year deal wouldn’t have raised too many eyebrows, but the way the signing was announced on the club website shows a great sense of humour.

The former England Youths international has signed from Notts County after a loan spell at Barnet last year, but it seems like this move had been on the cards for a while. So much so, that the site decided to pre-empt some possible grievances from supporters about the “typical” delay in official confirmation of the new signing. 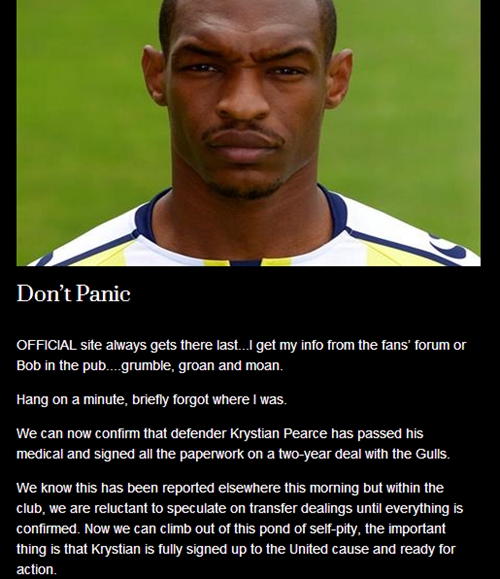 You can see the quotes attributed to Pearce here if you so wish and it goes without saying he is delighted to have signed for Torquay.

Again, a great sense of humour from the club, we think Soccer AM’s Helen Chamberlain would be very proud.

The Big Reviewski || JOE · TBR Spotlight: Loki - Episode Two - 'The Variant'
popular
Public warned about another sophisticated phone scam doing the rounds
Garda union hits out at "absolute confusion" over outdoor drinking and dining
The Queen appealing for volunteers to weed the garden of her Sandringham Estate
QUIZ: Name all the counties of Ireland that contain 3 vowels or more
QUIZ: Can you name all these European countries from a list of cities?
QUIZ: Can you get full marks in this potentially very frustrating general knowledge quiz?
There's a new phone scam doing the rounds - do NOT answer to or call back this number
You may also like
6 years ago
Is Torquay United's mascot the worst in football?
7 years ago
Scunthorpe fans asked not to dress as squirrels for clash with Torquay this weekend
5 years ago
JOE BUSINESS: 3 great reasons you should pop-up in Dun Laoghaire this summer
5 years ago
This new app will help you keep track of the Luas strikes
5 years ago
TWEETS: Mixed reaction as Joan Burton steps down as leader of the Labour party
5 years ago
VIDEO: All the thrills and spills from the AIB Start-up Academy Final
Next Page