Francesco Totti is a Roman institution at this stage and it looks like his legacy will live on as his nine year old has just signed for the club.

Totti's nine year old son, Cristian impressed on a number of trials in May with the Giallorossi and has now signed for their under nine team. Gazzetta dello Sport said that the youngster had his first training sessions with the young side, called the Pulcini, this week. They will play the small-sided game of seven-a-side with a smaller pitch and goals.

Francesco brought his son to the Roma training complex situated in Trigoria just to give him a feel for the environment. Whether the youngster possesses the ability to replicate some of his gifted father's ability, it remains to be seen, but he will have the best dad in the world to call upon for advice. Here's father and son in a picture taken back in 2007 when Cristian was two! 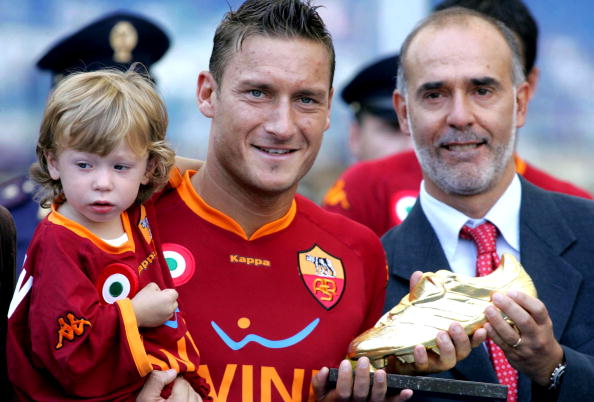 No pressure on young Cristian then!

The Big Reviewski || JOE · Director and writer Michael Rianda on new animated comedy The Mitchells vs. The Machines
popular
Simon Harris condemns "downright stupid" comments about student PUP payments
120 person wedding party in Longford was "very disappointing", says Pavee Point Co-Director
Here's the lineup for this week's episode of The Late Late Show
Joe Duffy listener complains of being quoted €4,100 for three-night hotel stay in Kerry this summer
WATCH: Stranger Things Season 4 gets a creepy new trailer
Irish Government hits back after reports UK authorities will ban Troubles-era prosecutions of British soldiers
The 50 most iconic songs of all time* have been revealed
You may also like
9 months ago
Six new Covid-19 clusters identified in vulnerable groups
1 year ago
Political hate speech could be criminalised in Ireland, a UN anti-racism committee has heard
2 years ago
Italian man charged over Sean Cox attack
2 years ago
The best reviewed movie of 2018 has been added to Netflix this weekend
2 years ago
Netflix's new movie from the director of Gravity is getting stunning, near-perfect reviews
2 years ago
WATCH: Here is the first trailer for the new movie from the director of Gravity and Children Of Men
Next Page