Transfer Talk: United and Chelsea battle it out over Song, Barca want Lovren and Cazorla gets cold feet

Today’s Transfer Talk is brought to you by the defeated Spanish team from last night. There's very little life in it at all.

The return of former Arsenal midfielders from Spain to Premier League clubs that aren’t called Arsenal appears to be all the rage these days and it appears as if it is going to continue with the return of Alex Song to England before the start of the new season.

United and Chelsea fighting it out over a song might sound like Louis van Gaal and Jose Mourinho have gone to blows over who gets to sing ‘Simply the best’ at a karaoke bar but according to the Daily Mail and the Daily Express today, the Premier League giants will fight for the right to sign another former Arsenal player who Luis Enrique doesn’t really fancy.

Harsh as it undoubtedly is to make judgements based on one game alone, watching the Cameroon international against Mexico yesterday you wouldn’t really blame Enrique, although both United and Chelsea will be tempted if the price is right and they can sign Alex for a Song.

Sticking with Arsenal, one of the reasons Arsene Wenger didn’t opt to re-sign Cesc Fabregas was because he had enough attacking midfielders already, but the Metro claim that one of them, Santi Cazorla, wants to move in the opposite direction to his international colleague and sign for the La Liga champions Atletico Madrid. 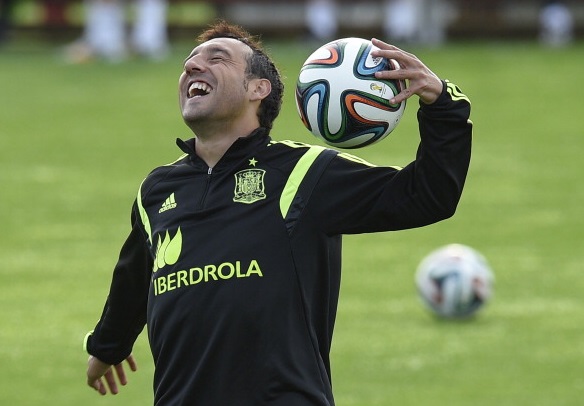 Given the amount of midfielders they’ve either signed or been linked with it’s a surprise that Chelsea don’t want Cazorla but they do, according to the Daily Star at least, want to snap up the German midfielder who could certainly double up as an effective movie assassin, Sami Khedira. Jose Mourinho, of course, did manage Khedira at Real Madrid and, like the reports linking Luka Modric with a move to Stamford Bridge, that’s enough for the red-top to suggest that a deal is in the works.

On what is really and truly a quiet day for transfer rumours, other reports suggest that Barcelona are keen on beating Liverpool to the signing of Croatian centre-half Dejan Lovren (Express), Liverpool have their eyes on Hoffenheim midfielder Roberto Firmino (Metro) and that the very decent Robert Snodgrass is interesting Hull, QPR, Aston Villa and West Ham.

We’re off to load up on sushi and sake because forget about England or anyone else, our boys JOE-pan make their World Cup bow tonight. Go on the lads.

popular
Dr Ronan Glynn says there will likely be no need for vaccine passports by June
Japan to release one million tonnes of contaminated Fukushima water into the sea
Hank Azaria feels he needs to apologise "to every single Indian" for playing Apu in The Simpsons
Taoiseach Micheál Martin says hotels across Ireland could reopen by June
Three-year-old girl dies after being struck by a bus in Tipperary
Dr Ronan Glynn says six more weeks of strict restrictions needed to prevent fourth wave
Steven Avery's lawyer says nephew Bobby Dassey planted evidence in case
You may also like
5 months ago
Gini Wijnaldum shares his favourite gym exercises for building abs of steel
5 months ago
Armed police close gym near Liverpool after owner refused to shut doors
1 year ago
Jurgen Klopp sends brilliant letter to 10-year-old Manchester United fan from Donegal asking him to stop winning
1 year ago
Seán Cox will move to England as he steps up his rehabilitation programme
1 year ago
Woman gives birth during Pink gig, names baby in her honour
1 year ago
QUIZ: How well can you remember the 2018/19 Premier League season?
Next Page