As footballing spats go it’s not quite up there with Fergie v Keane, but it’s just as entertaining.

It’s not nearly on a par with boxing in terms of the viciousness of the trash-talking, but occasionally a fairly feisty war of words will break out in footballing circles, be it between a player and manager, rival managers or clubs and certain sections of the media.

Never before has there been a more seething row than the one that broke out between rival MLS clubs Seattle Sounders and Vancouver Whitecaps last night, however, as they apparently argued over who had the best claim to the bragging rights in the Pacific Northwest region.

Seething row, in fact, is probably the wrong choice of words; unfailingly polite disagreement is probably more appropriate. Basically, it won’t surprise you to learn that one of the clubs involved is from Canada, eh? 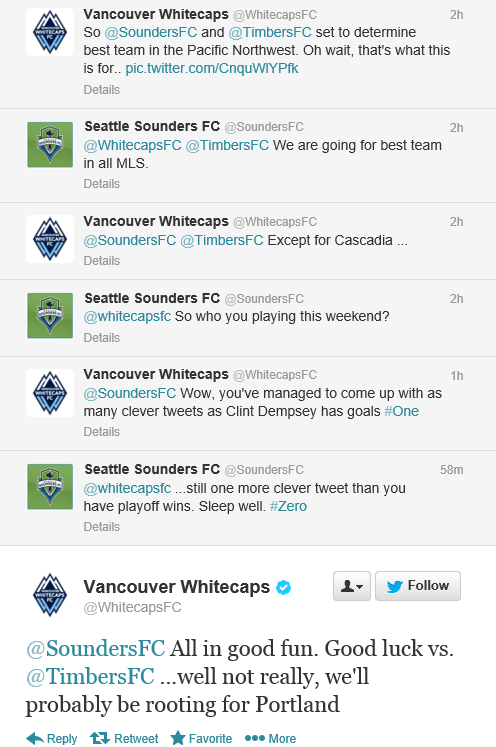 Can’t you just feel the venom spewing from every sentence?

If there was ever an actual football fight that could be compared to the one in print form, then we can’t think of one more suitable than this…

popular
The new film from the creators of South Park is going to get some big reactions
The JOE Movie Quiz: Week 137
Put the pedal to the metal with this General Knowledge Quiz
That Nic Cage film everyone is talking about is finally available to watch at home
Location of winning Lotto jackpot ticket worth €19.06 million confirmed
The JOE Friday Pub Quiz: Week 277
One of Ryan Gosling's best performances is among the movies on TV tonight
You may also like
2 years ago
WATCH: MLS player uses corner flag microphone to make comment on America's gun laws
3 years ago
WATCH: People are loving Wayne Rooney's magic moment in the MLS
5 years ago
VIDEO: Orlando City SC pay stunning tribute to victims of Pulse shooting
6 years ago
VIDEO: Will Ferrell now owns a Major League Soccer side, seriously
6 years ago
VIDEO: Robbie Keane's stunning goal for LA Galaxy last night
6 years ago
PIC: Robbie Keane's pre-match playlist features a legendary Irish folk singer
Next Page