Leyton Orient maintained their position at the top of League One with a 3-1 away win at Swindon, but it was a bruising encounter in more ways than one.

Orient goalkeeper Jamie Jones was the victim of an on-pitch assault from a home supporter during the encounter.

The irate fan ran onto the pitch and punch an unsuspecting Jones, who thankfully was okay to continue afterwards. The supporter in question was quickly arrested and Orient manager has called on the club to ban the supporter for life.

“Jamie is OK but it doesn't make it right, it is outrageous. He needs a ban for life and should never go to another football match. He had a long time in the six-yard box before the stewards did anything,” Russell Slade said afterwards. 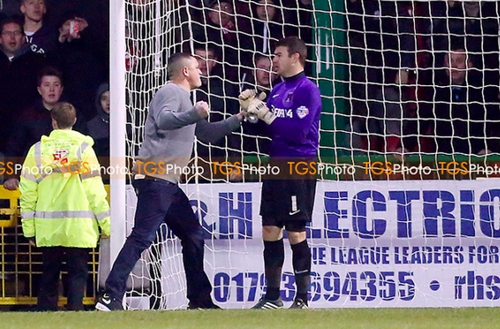 popular
That Nic Cage film everyone is talking about is finally available to watch at home
The new film from the creators of South Park is going to get some big reactions
Location of winning Lotto jackpot ticket worth €19.06 million confirmed
The JOE Movie Quiz: Week 137
Put the pedal to the metal with this General Knowledge Quiz
One of Ryan Gosling's best performances is among the movies on TV tonight
The JOE Friday Pub Quiz: Week 277
You may also like
7 years ago
Video: The promo for the Dónal Óg Cusack RTE documentary looks brilliant
7 years ago
Video: This hilarious but cruel goal would instantly make all goalkeepers hate their job
7 years ago
Video: Paul Scholes can still score outrageous goals...
7 years ago
Video: Goalkeeper in Iran grabs assist with possibly the best throw-out ever seen
7 years ago
Video: German Under 20 keeper nutmegs Polish striker
7 years ago
Video: Monaco use steel barriers to improve their goalkeepers' reflexes in innovative training drill
Next Page