The Super Cup might just be a glorified friendly but try telling that to Bayern Munich fans. And Franck Ribery.

Bayern triumphed in what was a quite brilliant clash against Chelsea in Prague last night, equalising through Javi Martinez in the final minute of extra-time to set up a penalty shoot-out in which Manuel Neuer saved Romelu Lukaku’s effort to secure victory for the German side.

Franck Ribery played a prominent role for the victors and having received the Uefa Best Player Award a day previous, he had plenty of reason to be in good form after the match.

Ribery joined the Bayern fans in celebrating what was an impressive but ultimately meaningless victory by leading them in a series of chants afterwards, a situation he might not have been in had Pep Guardiola been successful in his attempts to choke him after his equaliser in normal time a little earlier... 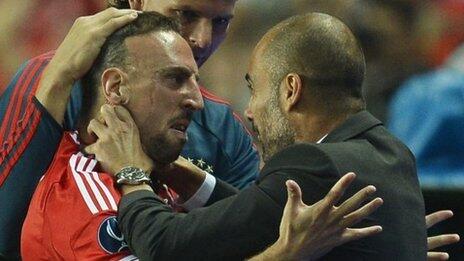 Hat-tip: Who Ate All The Pies

The Big Reviewski || JOE · TBR Spotlight: Loki - Episode Two - 'The Variant'
popular
The JOE Friday Pub Quiz: Week 248
Three men arrested after reportedly attacking staff of premises on South William Street
QUIZ: Can you name all these European countries from a list of cities?
Five great new movies added to your streaming services this weekend
WHO plan calls for preventing women of "childbearing age" from drinking alcohol
The 50 most iconic songs of all time* have been revealed
One of the most tense thrillers of the last ten years is among the movies on TV tonight
You may also like
1 year ago
Here's how to get tickets to Coca-Cola's last Premier League roadshow
2 years ago
"Are you talking about a man who took a 6th place Derby from the Championship, to 6th place in the Championship?"
2 years ago
QUIZ: Name these former Liverpool and Chelsea players
2 years ago
The Football Spin on Maurizio Sarri's problems and have Chelsea handed Manchester City the title?
2 years ago
The Football Spin on the Rafa Benitez conundrum, Chelsea's chance for glory and how English football anticipated Brexit
2 years ago
The Football Spin featuring the unsackable Jose Mourinho, the rise of Marco Ianni and the return of Mo Salah
Next Page