The former Celtic man is hitting a rich vein of form, and this goal is the mark of a man who's got plenty of confidence

As bad as Norwich were at defending the first goal against Swansea, they were the total opposite when it came to scoring down the other end with this sublime goal from Gary Hooper.

The Canaries found themselves trailing the Swans in what JOE has dubbed the Battle of the Birds thanks to a route one ball that Bassong was muscled out of by the diminutive Nathan Dyer, but their response before the break was superb. Unfortunately for Dyer, in another aerial challenge with Bassong later in the game he went down injured and was stretchered off with a suspected broken ankle, so he might be missing for a while after this game. 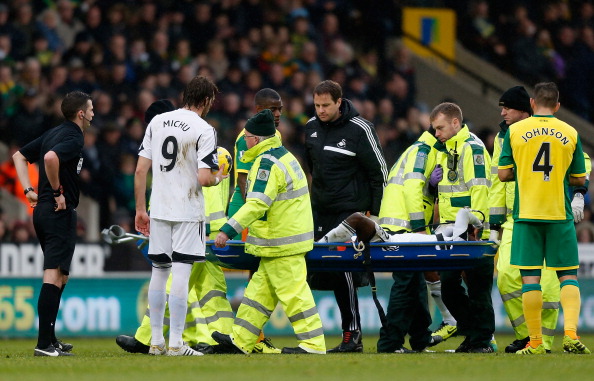 There's a brilliant bit of link up play as the ball is chested down to Hooper from Elmander and without needing to be asked twice he spots the goalkeeper Tremmel off the line and smashes a volley that leaves him with absolutely no chance.

A good sign for Norwich is that they have won every game in which the former Celtic striker has scored this season, so they'll be hoping that streak continues.

The Big Reviewski || JOE · The Big Reviewski with Andy Serkis, Squid Game follow-ups & the return of Succession
popular
New €140 million road officially opens today, replacing one of the Ireland's most dangerous roads
Expert wants 10 antigen tests delivered each week to every family this winter
QUIZ: Can you master this General Knowledge Quiz?
The JOE Movie Quiz: Week 124
The cleanest towns in Ireland have been named
QUIZ: Get your quiz on with this General Knowledge Quiz
The JOE Friday Pub Quiz: Week 265
You may also like
3 years ago
WATCH: Contender for Goal Of The Year as player scores stellar goal from inside their own half
5 years ago
Millions in funding withheld from Irish charity as investigation continues
6 years ago
VINE: Sheffield Wednesday have scored a goal that's so beautiful it would make Messi jealous
6 years ago
Video: Youngster from Cavan school scores the most un-GAA style goal in a schools GAA match
6 years ago
Video: German 6th division player scores from his own half
6 years ago
Video: Jose Holebas scored a screamer for Roma and was then involved in a really weird celebratory thing
Next Page