Which football club sells the most jerseys per year?

You could almost guess the first few, but guessing the order in which they are in is perhaps the challenge right here. Anyway, the BBC produced this table and it makes for interesting reading: 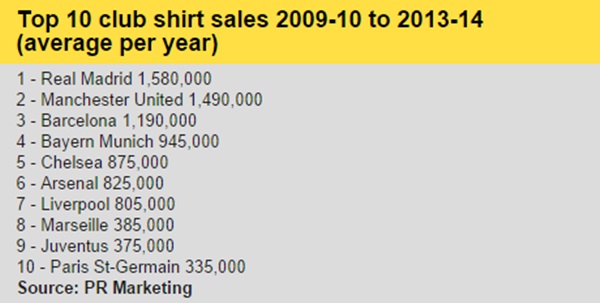 English clubs dominate the top ten with four clubs while Spain and France have two each, followed by Italy plus Germany with one each. There's a sizeable gap between Liverpool in 7th and Marseille in 8th and based on these figures it shows that the kit market is a highly lucrative one for the big kit manufacturers.

Nike and Adidas are the big players here kitting out five and four clubs respectively whereas Liverpool are the only club in the top ten not to be kitted out by either of them. They, of course, are signed up with Warrior.

popular
QUIZ: Can you guess the crisps from the pixelated packet?
Netflix has just added 33 very big movies to its library
Six people dead after mass shooting at Fourth of July parade in Illinois
The full list of cancelled flights in and out of Dublin Airport on Monday (so far)
The JOE Movie Quiz: Week 161
QUIZ: It's time for one of our trickiest General Knowledge Quizzes yet
QUIZ: Can you get 100% in JOE's great big halfway through 2022 quiz?
You may also like
1 month ago
BBC trainee accidentally posts message mocking Man United live on TV
1 year ago
COMPETITION: WIN a copy of Eric Cantona's new Manchester United documentary, The United Way, on DVD
1 year ago
Manchester United documentary written by Eric Cantona available to watch at home in Ireland this May
1 year ago
Marcus Rashford launches book club to help kids experience 'escapism' of reading
1 year ago
Paul Pogba releases powerful statement in response to 'fake news' from The Sun
1 year ago
The JOE Pub Quiz: Week 214
Next Page