"It's been the best thing that’s happened to us," insists Louis Copeland.

Tailor Louis Copeland has described how Conor McGregor singlehandedly breathed new life into his business, and that the UFC superstar's influence has altered men's fashion in Ireland.

The 28-year-old from Crumlin has built up an association with the Louis Copeland tailoring business since his earliest days in mixed martial arts, and the man behind the Dublin business told Nick Webb on The Capital B about working with one of the biggest names on the planet.

It all started with an appearance on The Late Late Show.

“The first suit we gave him, he went on The Late Late Show and Ryan Tubridy told him he was looking great. Conor said, “Louis Copelando!" revealed Copeland.

“He’s been great for us because he’s given us a younger image, and people now realise we cater for everybody. The everyman on the street is our regular customer.”

McGregor continues to visit Copeland in his flagship Capel Street store, one of six owned by the Copeland family as well as its online business.

“He comes in still. I sponsored him at the start and I have to say he’s been very good for us, and we’ve been good to him. It works both ways.

“The Conor McGregor look has been the best thing that’s happened to us. It’s been brilliant because he’s brought style to younger people. When did you ever see 16 or 17-year-olds dressing up in suits, bow ties, pocket squares and nice shoes? It really has made a big difference in the fashion industry.

“You’ve got to go out there and hit them between the two eyes, but now he’s beginning to tone it down a bit but he still wears nice clothes. He’s made people aware of how to dress up.” 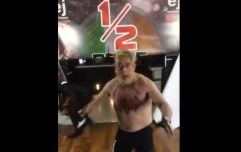 Video: A Sligo clothes store has gone all out with a Conor McGregor promo to announce a 1/2 price sale

END_OF_DOCUMENT_TOKEN_TO_BE_REPLACED

Copeland also spoke about the constant evolution in men's fashion in this country, and the reason why Irish men prefer darker suits to those worn by people on the continent.

“The thing about Irish people is their complexion. Irish people haven’t got the complexion that Italian or French counterparts have. They look better in darker colours – if you put light colours on a fella who’s a bit pale, he looks like a milk bottle. It’s important you match the colours to the complexion.”

He's also keen to see Irish men start to 'dress up' for work, as he believes a casual look in the workplace leads to a casual attitude.

“If you’re too casual in your dress sense, you’re going to be casual in your job. You don’t see a guard or an army officer wearing a t-shirt. If you put a good suit on you, it’s like a suit of armour. You feel good, your head goes back, your shoulders go back and you just feel better.”

Here is the interview in full on this week's edition of The Capital B with Nick Webb: