The holiday firm has closed after 178 years in business.

All 105 of the company's aircraft have been grounded and the company's website states that customers who are due to use the airline should not go to the airport, as the flights will not be operational.

In the UK alone, the CAA are working in conjunction with Thomas Cook to bring home over 150,000 holidaymakers, which BBC News called "the biggest ever peacetime repatriation".

While the company pulled out of the Irish market a number of years ago, some Irish tourists may still be affected by the closure, but the Irish Travel Agents Association believes the number is very small, telling RTÉ News that any bookings by Irish holidaymakers would have been made directly through the firm and would have involved flying through the UK.

RTÉ News also estimated the number of holidaymakers affected by the sudden closure to be around 600,000.

Additionally, the closure of the tour operator will put 22,000 jobs at risk worldwide. 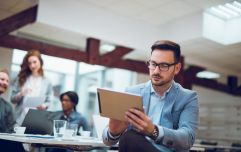 Fancy travelling and marketing across the globe with Bord Bía? Come this way

END_OF_DOCUMENT_TOKEN_TO_BE_REPLACED

The company failed to secure the extra £200 million needed to keep the business afloat following a full day of talks with investors and shareholders, with Peter Fankhauser, Thomas Cook's chief executive, stating: "Despite huge efforts over a number of months and further intense negotiations in recent days we have not been able to secure a deal to save our business.

"It has been my privilege to lead Thomas Cook. It is deeply distressing to me that it has not been possible to save one of the most-loved brands in travel."

Customers who believe they may be affected by the closure are asked to head to this website and follow appropriate instructions.


popular
The lineup for this week's Late Late Show has been revealed
QUIZ: Can you guess the pixellated movie posters?
QUIZ: Can you name all these European countries just from their vowels?
Met Éireann says there's a risk of snow for parts of Ireland this weekend
QUIZ: How many of these Recess characters can you name?
Man being treated for suspected case of coronavirus in Belfast
Everything Irish fans need to know ahead of the WWE Royal Rumble this Sunday
You may also like
1 week ago
First year-round direct Ireland to Egypt service launches this summer
1 month ago
PICS: Stena Line are launching a new ferry and it looks pretty impressive
1 month ago
Irish Rail introduces reusable cups on services but won't allow customers to use their own
1 month ago
Several Aer Lingus and Ryanair flights cancelled due to strike action in France
1 month ago
Irish Rail announce late-night Christmas services for DART and commuter lines
2 months ago
The best Christmas markets in the world for 2019 have been named
Next Page