Do you know what's in your drinking water?

A Freedom of Information Act request has revealed that nine of the 422 water supplies tested so far this year have shown dangerously high levels of lead.

Three of these supplies were in the Dun Laoghaire/Rathdown area, and they showed 10 times the legal limit of lead. Other failures were found in Longford, Tipperary and Galway. 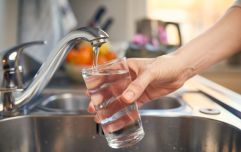 Boil notice issued for 600,000 people in parts of Dublin, Kildare and Meath

END_OF_DOCUMENT_TOKEN_TO_BE_REPLACED

Irish Water has previously said that all water leaving its plants is lead-free, and that it does not use lead pipes to transport water. However, many private properties still have lead pipes.

In a statement issued to JOE earlier today, a spokesperson for Irish Water said: "Lead plumbing was used widely in houses built up to the 1980s and it is estimated that there are 180,000 properties in Ireland with lead plumbing.

"This estimate is based on the age of the housing stock around the country. As water passes through private connections (the pipe from the road to the property) or internal plumbing made of lead, the lead can be dissolved into the water.

"If lead is present then the homeowner will need to replace their internal plumbing."

According to the HSE, exposure to lead can cause several significant health and developmental problems.

popular
The Toy Show DJ brothers have been offered their very first gig
Clint Eastwood's final western is among the movies on TV tonight
The JOE Friday Pub Quiz: Week 271
The full list of all the new shows and movies coming to Netflix in December
QUIZ: Let's get cracking with this General Knowledge Quiz
PCR tests to be required for all international arrivals to the UK
Ryanair's "virtue signalling" claims are indicative of Ireland's view on the Irish language
You may also like
2 months ago
Irish Water apologises after contaminated drinking water leads to hospitalisations
2 months ago
Illnesses detected in Wexford after "unsafe water" entered public drinking supply
4 months ago
Irish Water urges public to conserve water amidst heatwave
4 months ago
Irish Water urges people not to water gardens or take extended showers
6 months ago
Paul Murphy says there will be 2014-style mass protests if the Government re-introduce water charges
1 year ago
Raw sewage flows into rivers and sea in 35 locations around Ireland every day
Next Page