A teenage cancer survivor has issued a heartbreaking plea for friends online after he spent most his childhood battling illness.

19-year-old Jordan Kosovich developed leukemia when he was just seven, and as a result, he spent most of his childhood in and out of hospital battling the disease.

Hailing from Perth, Australia he missed over two years of school while he fought to beat cancer once and for all.

END_OF_DOCUMENT_TOKEN_TO_BE_REPLACED

While thankfully, he has since been given the all clear, his social life was basically non-existent during his treatment and hence at 19, he has been left with very little friends.

He took to Gumtree to advertise for friends.

"I couldn’t be more proud that I survived it, but in all honesty the day I found out I had cancer my childhood stopped in its tracks and it never recovered.

"Which meant I missed out on a great deal of social time, which made it really challenging for me during primary school because I missed 2 years as I was too sick to go.

"Things didn’t get any better for me throughout high school it was a really horrible experience for me no one ever gave me a chance no matter what." 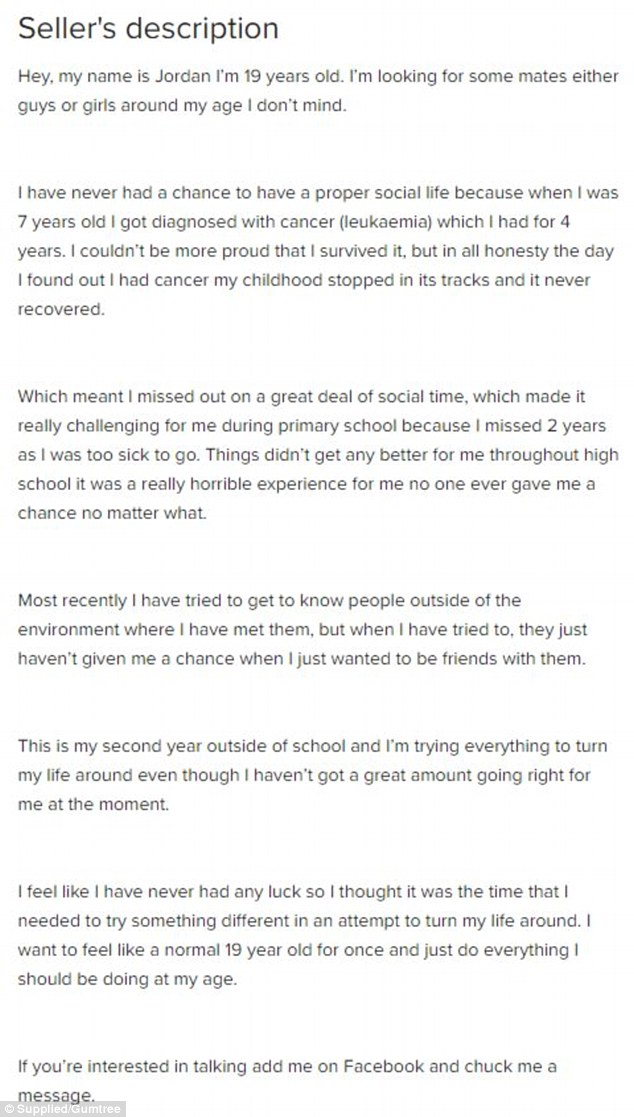 END_OF_DOCUMENT_TOKEN_TO_BE_REPLACED

Jordan told MailOnline Australia: "It was hell the whole five years, no one could pay me enough money to get me to go back into those situations, just horrible altogether.

"I went to a different school from Year 11 but it started again once people found out I had no friends. No one ever gave me a chance."

END_OF_DOCUMENT_TOKEN_TO_BE_REPLACED

As to why he made the ad, Jordan said: "I wanted to feel like a normal 19-year-old for once and just do everything I should be doing at my age. I thought posting an ad was a crazy thing to do, but I was really struggling and just thought to try something different, and it’s worked."

He has received hundreds of messages on Facebook from kind-hearted people who want to take him up on his offer to be friends. The post has also been shared widely on social media.

popular
20 years ago, one of the best sci-fi movies of the 21st century was a box-office bomb
U2 drummer Larry Mullen Jr. says band may perform without him in 2023
Peter Kay moved to tears on stage while opening his first stand-up tour in 12 years
Mia Khalifa claims seaside town is better than Miami
Patient arrested after switching off roommate's ventilator because it annoyed her
Simon Cowell concerns fans with appearance as they 'don't recognise him'
The JOE Movie Quiz: Week 182
You may also like
2 weeks ago
Chris Hemsworth taking "good chunk of time off" following Alzheimer's discovery
2 weeks ago
Chinese man runs entire marathon in three and a half hours while chain smoking
1 month ago
Government plans to ban smoking from parks and beaches
3 months ago
Drinking tea regularly may be linked to lower mortality risk, study finds
4 months ago
New Spanish hospital to offer "alternative pathway" for Irish patients waiting for routine treatments
1 year ago
3 dodgy myths and 3 surprising facts about erectile dysfunction
Next Page