When you were 19, the amount of drink you consumed the night before probably wouldn't affect you too much the next day, unless you went very hard on it.

While there may have been a brief period of nausea and a mild headache, it's nothing compared to what someone just a few years older will experience for consuming a fraction of the amount.

So why does this hangover increase in severity as you get older?

While some may say it's all in your head, gastroenterologist Mark Welton, M.D. explained to Men's Health that it's actually because your body is changing and your liver is not processing alcohol with the efficiency of your younger self.

“When we get older, our whole recovery process for everything we do is harder, longer, and slower,” Dr. Welton said. 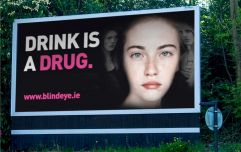 Anti-drinking advertisement blocked on grounds of being too political

END_OF_DOCUMENT_TOKEN_TO_BE_REPLACED

As you get older, your body produces less dehydrogenase. This enzyme is responsible for breaking down the two types of alcohol, ethanol and methanol, which are present in most of your favourite drinks.

Basically, this means that as you get older, your body can't process alcohol as quick and it stays in your system far longer, which means that your "two-day hangover" is actually a real thing.

To sum it all up, you're not imagining it, your hangovers are getting worse. The only way to avoid it is to cut back on how much alcohol you drink.

Did someone say New Year's resolution?


popular
Met Éireann state that three days of snow, hail, and sleet is coming for parts of Ireland
Gardaí name the three children that were found dead in a Dublin home
QUIZ: Name the missing word from these famous Derry Girls quotes
The JOE Friday Pub Quiz: Week 175
QUIZ: We give you the movie title, you tell us the dog breed in it
Viewers raise over €300,000 after Munster's Billy Holland and wife Lanlih's emotional Late Late Show appearance
The shortlist for the best breakfasts in Ireland has been revealed
You may also like
1 month ago
Two-thirds of Irish 18-24 year olds report drinking as a coping mechanism
1 month ago
Over 300 drivers arrested on suspicion of intoxicated driving in Ireland in the last two weeks
2 months ago
Almost two-thirds of weekly drinking occasions take place at home, according to new study
2 months ago
€1.4 million of alcohol seized at Dublin Port last month
3 months ago
QUIZ: Can you identify the beer just from its can?
3 months ago
Budget 2020: Price of packet of 20 cigarettes increases by 50 cent, alcohol remains unchanged
Next Page