US authorities say someone has died from a vaping-related illness

It's the first incident of its kind.

The Centre for Disease Control and Prevention, which is the US's leading national public health institution, suspect that vaping has claimed its first life.

It is the first fatal case of pulmonary and respiratory illness linked to vaping, though the CDC says it has seen over 200 such cases of "severe unexplained respiratory systems after reported vaping or e-cigarette use."

This week, the organisation confirmed that somebody had died in Illinois from what appeared to be a vaping-related illness.

Speaking on the cluster of such illnesses, a representative for the CDC said: "Some cases appear to be similar and linked to e-cigarette product use," though "more information is needed to determine what is causing the illnesses."

According to Tech Crunch, the CDC's Dr. Brian King warned: "We do know that e-cigarettes do not emit a harmless aerosol. There’s a variety of harmful ingredients identified, including things like ultrafine particulates, heavy metals like lead and cancer-causing chemicals." 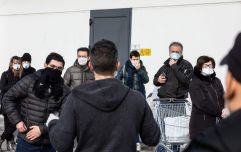 A fourth person in Italy has died from the coronavirus

END_OF_DOCUMENT_TOKEN_TO_BE_REPLACED

It is estimated that 4% of the Irish population regularly use vapes.

According to the HSE: "Current government policy does not identify a role for e-cigarettes in tobacco control in Ireland. The Department of Health continues to monitor evidence in this areas as part of its ongoing monitoring and review of Tobacco Free Ireland  and will determine any updates to policy as appropriate."


popular
Singer Duffy reveals she was drugged and raped while being held captive
Rallies prove that Sinn Féin are playing the game better than anyone else right now
QUIZ: Can you name the capital cities of these 30 countries? (Part Two)
QUIZ: The devilishly tricky grammar quiz that will drive you around the bend
The 50 most iconic songs of all time* have been revealed
Netflix's new thriller The Woods will be your next TV obsession
These are the 10 most popular movies and TV shows on Netflix in Ireland right now
You may also like
7 hours ago
Singer Duffy reveals she was drugged and raped while being held captive
15 hours ago
Holidaymakers in Tenerife told to 'stay in rooms' as hotel with 1,000 guests on lockdown due to coronavirus
19 hours ago
Man stabbed to death in Dublin
1 day ago
Harvey Weinstein found guilty on two counts, first-degree sexual assault and third-degree rape
1 day ago
A 32-year-old man has died following a traffic collision in Kilkenny
1 day ago
Truck driver jailed following dangerous motorway u-turn
Next Page