From Ric Flair to Stone Cold to John Cena, this is why we love the Rumble.

Wrestlemania might claim to be the Superbowl of wrestling, but we all know that the Royal Rumble is truly the greatest event in the WWE calendar.

The rules are simple: two wrestlers start in the ring and another enters every 90 seconds until all 30 have arrived. You get eliminated by being thrown over the top rope, the winner is the last one standing and the prize is a shot at the World Title in the main event of Wrestlemania.

END_OF_DOCUMENT_TOKEN_TO_BE_REPLACED

It’s the most perfect format for sports entertainment ever created: a wonderful mish-mash allowing for dream-match face-offs, genuine emotion and campy comedy all at the same time, with the constant stream of entrants meaning it never gets dull.

The 31st Rumble takes place this Sunday night, and part of the fun is waiting for all the little clichés and callbacks that happen every year. Here are the 30 reasons – one for each competitor – why the Rumble is the best night of the wrestling year.

Every year, before the Rumble itself, we get the now-traditional ‘By The Numbers’ video, reeling off stats like pro wrestling’s version of Opta Joe. Yes, it might all be pre-determined, but going through the data completely straight-faced like this just guarantees instant hype for some reason.

2. The big names in at number one

In 1999, the previous year’s winner Steve Austin entered at number one. In 2008, The Undertaker and Shawn Michaels kicked things off. It wouldn’t have the same reaction if X Pac and Funaki came out first.

There’s always a big name who hasn’t been seen for a while, and having their music hit at the Rumble is one of the biggest pops in wrestling. Key examples: John Cena in 2008 and Triple H in 2016. 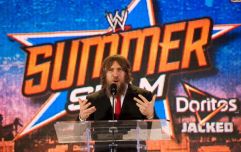 END_OF_DOCUMENT_TOKEN_TO_BE_REPLACED

AJ Styles stepping into a WWE ring for the first time in 2016 is still one of the most spine-chilling moments in Rumble history. Having torn it up in TNA, the indies and in Japan, Styles was the biggest name in wrestling to never actually compete in the Fed.

6. When the ring get cleared and there’s just one guy left waiting, so he grabs a microphone and starts talking

See CM Punk in 2010, at the height of his Straight Edge Society glory.

7. When someone is eliminated by their tag team partner or ally

Remember when Rikishi danced with his boys Too Cool...

... then chucked them out of the ring?

8. When an old tag team face each other, and team up again

11. The above, but for The Great Khali

12. The moment when all the other wrestlers team up to get The Big Show / Kane / The Great Khali out of the ring

13. When someone eliminates themselves out of fear

Like when '90s comedian Drew Carey inexplicably entered the Rumble and found himself staring up to Kane... so quickly climbed over the ropes and ran off.

14. Alternatively, when someone eliminates themselves out of sheer hatred for their opponent

When Randy Orton was still just a cocky young upstart, he became embroiled in an under-rated feud with then-commissioner Mick Foley, spitting in his face and banishing him from Raw. But in one of the most exhilarating Rumble moments, the Hardcore Legend would make a surprise return to bundle Orton over the top rope, taking himself over as well.

15. When a non-wrestler enters

Sometimes it the aforementioned Drew Carey. Or sometimes it’s Vince McMahon himself, who went and won the whole damn thing in 1999, because Vince is a crazy person.

i.e., when someone goes over the top rope but flips themselves back into the ring using just their upper body strength. Shawn Michaels was the master of it.

High flying Kofi Kingston bounced around the WWE for several years before striking gold with The New Day, but he could always be relied upon to do something utterly magnificent to avoid both feet touching the floor in the Rumble. He’s walked on his hands, hung on other wrestler’s backs, bounced around on office chairs, taken incredible leaps off the barricade and even rode around on Big E’s shoulders.

18. The absolute beast who gets most eliminations

In 2001, Kane ran riot, taking out 11 other competitors in a single Rumble, a record that stood until 2014 when Roman Reigns got one more.

The guy who doesn’t win it but puts in an extra-long shift. A 46-year-old Chris Jericho managed to go a full hour last year.

20. The guy who gets eliminated straight away

21. When someone whose finisher is a submission does it in the middle of the ring, and the commentators scream “But they can’t win the match that way!!!!”

The point when it gets serious, when down to just the top guys. Possibly never stronger than 2001, when it was Steve Austin, The Rock, Kane and, er, 'The One' Billy Gunn.

You all put a fiver in, everyone draws numbers and if your guy wins, you get the lot. Bad luck if you draw Heath Slater. There’s also plenty of drinking games out there, but we’d never condone that sort of thing.

25. Watching it with people who haven’t followed wrestling since they were a kid and constantly ask if Randy Savage or Andre The Giant is still there

The Rumble is always the best thing to get a lapsed fan back on the bandwagon.

26. The delirium that wrestling fans in Ireland and the UK get that comes from staying up until 4am and knowing they have work on Monday morning.

(This applies to all WWE PPVs, but is even more noticeable in the cold month of January).

27. The simple joy of counting down from 10 to one

28. When a guy you completely forgot was still employed by WWE comes out to no reaction

R-Truth is still there!?!

29. Just the sheer adrenaline of waiting to see who comes out next – the format never gets boring.

30. The ecstasy of the underdog winner

Sure, not every Rumble is fantastic, but when they have an underdog enter early, get his head down and toil away to eventually emerge victorious, there’s nothing like it.  Rey Mysterio and Christ Benoit’s victories stand out (even though we don’t talk about the latter).

But nothing will ever beat Ric Flair entering at number three and lasting a full hour to take the title in 1992, AKA the greatest Rumble ever.