WATCH: Irish MMA fighter shares lovely video of him and his grandad singing 'Imagine' together

Don't blame us if you end up crying your eyes out here.

Professional MMA fighter Ian Garry, who is signed to Cage Warriors, has shared a video of him showing off his new tattoos to his grandfather, but with a serious twist.

Speaking to the camera, 21-year-old Garry reveals that one of the tattoos is a tribute to his grandad. 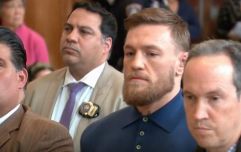 Conor McGregor is reportedly being lined up for a plea deal that will allow him to fight in the U.S.

END_OF_DOCUMENT_TOKEN_TO_BE_REPLACED

"He's got dementia so he can't really remember a lot of things lately, and obviously it's getting worse. But for some reason whenever you say the word imagine," he immediately goes to John Lennon and starts singing."

"I'm hoping and praying now if I say this, he'll sing it."

Sure enough, as soon as Garry shows his grandad the new ink, the older man starts to sing, prompting Ian to sit down beside his grandad for a grandad-grandson duet. These lads don't get a single note wrong, either.

A truly lovely moment that will almost certainly fill you up with love for the older family in your life. Watch below:

The clip has deservedly gone viral, picking up over 10,000 likes on Twitter in half a day.

popular
The "eighth best movie ever made" is among the movies on TV tonight
Jennifer Lawrence sparks controversy by saying she was the first woman to lead an action movie
One of the best films of all time is among the movies on TV tonight
The start of the superhero takeover of Hollywood is among the movies on TV tonight
QUIZ: JOE’s Big News Of The Day Quiz #27
Met Éireann updates weather warning for entire country as temperatures set to fall to -6
Mia Khalifa claims seaside town is better than Miami
You may also like
1 month ago
Conor McGregor slammed for Halloween photo of mum in 'black face'
2 years ago
Paddy Holohan has been suspended from Sinn Féin over his claims that "scum" underage girls were having sex with men and blackmailing them
3 years ago
Straight Blast Gym Ireland to open new location in Dublin this month
3 years ago
Conor McGregor agrees to a fight against Donald Cerrone
4 years ago
Tony Ferguson explains why he thinks he would beat Conor McGregor
4 years ago
Khabib Nurmagomedov is interested in a fight against Conor McGregor under boxing rules
Next Page