WATCH: Alex Jones appeared alongside Joe Rogan for a four-hour podcast, and it's exactly as crazy as it sounds

You deserve some sort of award if you manage to sit through this entire thing.

Conspiracy theorist Alex Jones appeared on the Joe Rogan Experience on Wednesday, and it was a bizarre experience altogether.

It wasn't Jones' first time on the podcast either. The first time he appeared, he chatted to Rogan for three and a half hours, and this time he's gone for over an hour longer. 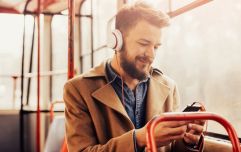 International Podcast Day is a thing, so here's the top 20 most popular podcasts right now

END_OF_DOCUMENT_TOKEN_TO_BE_REPLACED

Jones discusses a wide range of topics with Rogan and his more regular guest Eddie Bravo, who is also a fan of a conspiracy himself.

At one point, Alex Jones told Rogan that a group of billionaires plot to control the rest of the world through mind control and IQ-lowering drugs, leaving masses of morons controlled by robots delivered by the off-world entities.

Rogan kept his mouth pretty much shut throughout the whole thing, and clearly had no real intention to call Jones out on any of the controversial stuff he said...

Just take a look at this short clip where one of Jones' abortion theories came up.

It resulted in Jones physically threatening Eddie Bravo, telling him that he was "gonna get it".

Take a look at the full interview here, if you feel you're able for it:

The Big Reviewski || JOE · Mortal Kombat director Simon McQuoid and new Sub-Zero star Joe Taslim on fatalities and fight scenes
popular
The JOE Friday Pub Quiz: Week 242
Kate O'Connell lays into Fine Gael in explosive Claire Byrne interview
The 50 most iconic songs of all time* have been revealed
"Giant" piece of Chinese rocket set to hit Earth this weekend
Here are the best movies on TV this evening
COMPETITION: Win a star-gazing camping adventure to the stunning Aran Islands for you and your housemate
Cillian Murphy looks terrified in the final trailer for A Quiet Place Part II
You may also like
1 week ago
Joe Rogan criticised for encouraging healthy young people not to get the Covid-19 vaccine
4 months ago
Why Joe Rogan's Carnivore Diet didn't really help him lose 12 pounds
2 years ago
Kanye West has announced that he will be on Joe Rogan's podcast
2 years ago
Joe Rogan invites Kanye West to appear on his podcast
2 years ago
Joe Rogan defends Conor McGregor over UFC 229 criticism
2 years ago
Coach John Kavanagh will appear on the Joe Rogan podcast following UFC 229 drama
Next Page