"The ignorance and laziness present in modern times have won."

An organisation that was created in 2001 to highlight the importance of the apostrophe has closed down after 18 years in operation. A sad, sad day for the punctuation lovers out there.

John Richards, who worked in journalism for much of his career, started the Apostrophe Protection Society in 2001 after he retired. 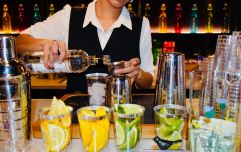 END_OF_DOCUMENT_TOKEN_TO_BE_REPLACED

He aimed to preserve the "much-abused" punctuation mark, which is commonly used in the wrong places.

Richards announced on his website that that the society was closing down, as "laziness" had won, saying: "With regret I have to announce that, after some 18 years, I have decided to close the Apostrophe Protection Society.

"There are two reasons for this. One is that at 96 I am cutting back on my commitments and the second is that fewer organisations and individuals are now caring about the correct use of the apostrophe in the English Language.

"We, and our many supporters worldwide, have done our best but the ignorance and laziness present in modern times have won!"

We're just a little bit disappointed that there was no punctuation errors in the statement.

The website (www.apostrophe.org.uk), will remain open to remind all writers of English texts of the correct use of the apostrophe.

popular
Amazon Prime Video has just added 21 big movies to its library
Shock as blues singer beats Adele, Beyonce and Taylor Swift to win Song of the Year Grammy
One of the most underrated crime thrillers of recent years is among the movies on TV tonight
Ben Affleck's bored expression at the Grammys becomes a meme
5 years ago, Hollywood took a massive gamble on a huge sequel... and lost big time
One of the best crime thrillers ever is among the movies on TV tonight
QUIZ: JOE's Big News Of The Day Quiz #41
You may also like
1 month ago
Sports reporter asked to cover snow storm goes viral thanks to his cranky coverage
5 months ago
Massive 130ft superyacht sinks off the coast of Italy
7 months ago
Johnny Depp case: Man who went viral on TikTok claiming to be a juror admits it was a 'prank'
11 months ago
WATCH: Russian soldier loses fight against door
1 year ago
Video shows Taiwanese army practicing urban warfare in front of mock Dublin pub
1 year ago
Who started the 'plant one tree for every pet picture' trend on Instagram?
Next Page