Seven days that should be made Bank Holidays in Ireland

Seven days we should have off every year.

The topic of a brand new Europe-wide Bank Holiday was discussed in the European Council on Tuesday to celebrate our involvement in the EU. The purpose of the day off would be an attempt to build a stronger European identity among citizens and what better way to do that than by letting us all do what we want for that day?

But it got us thinking, what are some other things that are worth celebrating to the point that we should all get a day off?

Here's what we could come up with...

The man who slipped on the ice

END_OF_DOCUMENT_TOKEN_TO_BE_REPLACED

Why: He was our hero. He was our mate. Really, has there been a better moment on Irish television since this happened? We genuinely don't think so. This guy didn't need any of the limelight, he just showed up for a second or two, fell hilariously, and was on his way. A national treasure.

When: There doesn't need to be a set date for this one. Once it starts snowing really heavily, or it gets particularly cold, we can just pick one of the days that week, and we all take a day off to remember what he did for us. 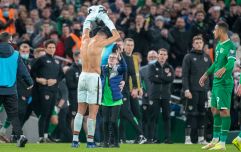 END_OF_DOCUMENT_TOKEN_TO_BE_REPLACED

Why: We're not exactly celebrating this one, but we're using it to keep us grounded. To remind us how low we've gotten, and how we managed to bounce back from it. If, as a nation, we are able to take such a dark moment in our history, and turn it into a positive day, we will be all the better for it. By the way, did you hear he was just sacked by Monaco after less than three weeks in charge?

When: The infamous date that it happened - 18 November.

Why: Brian McFadden = braver than the troops. This day would pay tribute to when McFadden, formerly of Westlife, tried to solve the issue that the world had with ISIS, by challenging them to a fair fight. Worth a go anyway, Brian.

Wouldn't it be great if isis had the balls to stand face to face with us and fight. No weapons. No bombs. No dead children. Man to man!

"Does anyone want a soft drink?"

Why: Because it's the funniest Irish sketch of all time. Simple as. Comedian Tony Cantwell takes the piss out of funny Irish names and Irish accents in this absolutely bizarre video, that will go down in history of Irish comedic moments.

When: The day it was posted online - 6 December. What better way to get us in the mood for Christmas?

Why: There is just no way that you need us to explain anything about this incident, but we're going to anyway. The late Bill O'Herlihy was referencing an article about Roy Keane to Eamon Dunphy, which Dunphy seriously took issue with. He questioned Bill about whether he knew who wrote it, and Bill did not. Eamon did though. "I'll tell you who wrote it. I can remember his name. Rod Liddle. He's the guy who ran away and left his wife for a young one."

When: Let's go with Eamon Dunphy's birthday for this one - 3 August.

Why: Because anybody this cool deserves to be celebrated as much as possible. To be able to do what he did with such little effort definitely deserves to be appreciated on a global scale. We'll say no more, and just let you watch him in all of his glory.

When: 11 March. The date it all went down, and we could do with something before Paddy's Day.

Why: This isn't necessarily a celebration of our Taoiseach's birthday, but more like a celebration of something that happened on his birthday. RTÉ made a compilation of interviews with people on the street who were asked whether they wanted to wish Varadkar a happy birthday, and the responses were absolute gold.

It also features one of the best moments in TV history, which included the words "Up the nurses". It's about 19 seconds into this clip. Enjoy.

Jesus whoever edited this @rtenews piece on Leo’s birthday deserves a medal pic.twitter.com/VNAlzKTVTn

popular
Schools affected by Storm Barra expected to reopen tomorrow, says Minister
Gardaí warning people not to make unnecessary journeys in anticipation of Storm Barra
Carlow woman banned from keeping animals for life after starving dogs to death
Majority of employers will require employees to visit office on weekly basis
Man dies after being attacked by newly calved cow in Mayo
"Danger to life" risk with Storm Barra "weather bomb", warns Met Éireann
This new rom-com about writing a Christmas #1 is absolutely going to make you cry (in a good way!)
You may also like
3 days ago
Irish people among the heaviest drinkers in the world, new survey finds
4 days ago
Here's the line-up for this week's episode of The Late Late Show
5 days ago
Game of Thrones Studio Tour will open in Ireland in February 2022
2 weeks ago
Ireland is the 11th most affordable country to buy a home in, says new study
1 month ago
"It’s obvious these guidelines were issued by Government without any meaningful consultation with the hospitality sector."
1 month ago
CONFIRMED: Nightclubs to open at 100% capacity, 11.30pm curfew has been removed
Next Page