Barry Keoghan's story of growing up in foster care is harrowing, but the strength he took from it is inspirational

Barry Keoghan has told his story before, but not like this.

On the opening episode of Ireland Unfiltered, Keoghan told Dion Fanning about the harrowing moment he first went into foster care and the bond he has with his brother, Eric.

Keoghan is one of Hollywood’s hottest talents but his upbringing in Dublin wasn’t glamorous, even if it has provided him with an exceptional outlook on life.

“I remember it, it wasn’t nice. It’s not ever nice, kids being taken from their parents. We were brought…there was an office in Mountjoy Square and you’d go and wait there. I remember a little toy section down the back and a little play area.”

Keoghan says he never had a bad experience with the social workers or the families who took him in, but it’s a “bad experience in itself”.

There were 13 foster homes between when he was 5 and 12 and he says they merge in his mind.

“It becomes one memory, it becomes a montage in your mind. I remember this pink panther teddy.”

Keoghan’s mother, who was a heroin addict, wasn’t able to care for Barry and his brother Eric, but each Saturday she would see her boys.

“We’d see her. We’d see her every Saturday and stuff. She’d bring us to McDonald’s and the cinema and stuff like that. Now it’s painful thinking about it. As a kid, you’re there, ‘There’s my mammy’, but you’re also being sheltered by this family so you’re not really, it’s a weird one.”

When Keoghan was 12, his mother died. “My nanny and my aunty told us. It wasn’t a nice day, it was the worst day of my life. I was about 12 but there was something in me that I just took it and it made me stronger.” 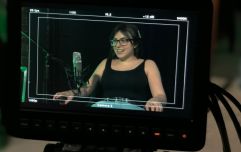 END_OF_DOCUMENT_TOKEN_TO_BE_REPLACED

It’s a harrowing story but an inspirational one.

You can listen to the full interview here.

popular
The "eighth best movie ever made" is among the movies on TV tonight
15 years ago, one of the greatest scenes of the 21st century arrived in cinemas
Mia Khalifa claims seaside town is better than Miami
The start of the superhero takeover of Hollywood is among the movies on TV tonight
CMO confirms death of child in Ireland from invasive Strep A
QUIZ: Can you name all the countries in the world containing the letter 'Z'?
Here's the line-up for this week's episode of The Late Late Show
You may also like
3 years ago
Jack Whitehall on dealing with the "posh guilt" that came with his upbringing
3 years ago
COMPETITION: Win four tickets to Republic of Ireland v Denmark
3 years ago
Joe Brolly: "The DUP is about narrow self-interest"
3 years ago
'I was told Joanne Cantwell had lost confidence in my abilities as an analyst'
3 years ago
There will be no price to pay for loyalty of the EU, according to Paschal Donohoe
3 years ago
Lisa Chambers: Mood towards Fianna Fáil has changed “completely” since 2011
Next Page