It could be a costly mis-steak, but this is the most novel condom idea we have ever herd. Ladies and gentlemen, the beef-tendon condom could be on its way.

According to The New State, on Wednesday, the Bill & Melinda Gates Foundation announced it was disbursing $1 million in grants for a next-generation condom that does the job without the perceived pleasure trade-off.

The University of Oregon are to use some of the fund to develop an ultra-thin condom of a polyurethane polymer with “shape memory” properties. During intercourse, body heat would cause molecules in the condom to contract, moulding it to the user. The material also would be thinner — about half as thin as current condoms — and twice as strong. Think we're all nodding so far folks. 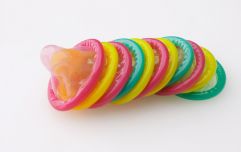 The latext technology: Japan has produced the world's thinnest condom

END_OF_DOCUMENT_TOKEN_TO_BE_REPLACED

Dr. Papa Salif Sow, a senior program officer on the HIV team at the Gates Foundation says that it is in response to the fact that most men questioned prefer not to wear a condom, despite the risks involved.

“The common analogy is that wearing a condom is like taking a shower with a raincoat on. A redesigned condom that overcomes inconvenience, fumbling, or perceived loss of pleasure would be a powerful weapon in the fight against poverty.”

We have to say we have no beef with the research, and it could be a great moo-ve by the Bill Gates Foundation.

House of Rugby Ireland · Ireland's feel-good win, Casey's initiation song, scrapping Sexton and Scott Williams interview
popular
Eoghan McDermott to leave RTÉ after six years (Report)
€17,500 worth of cocaine found at street party in Limerick
Sony are giving away a free game to all PS4 and PS5 owners
WATCH: Michael B. Jordan leads Jack Ryan spin-off Without Remorse
One man has been charged following Limerick street party, 50 FPNs issued
NUIG students told to write 2,000 word essay for breaching Covid rules
Robbie Williams to be played by CGI monkey in biopic based on his life
You may also like
6 years ago
Pic: Rio de Johnny-eiro. Neymar condom available for the World Cup
1 month ago
First-time buyers in the west and northwest: This virtual First Time Buyers Masterclass will kickstart your mortgage
1 month ago
Mick Foley asks Vince McMahon to kick Donald Trump out of the WWE Hall of Fame
1 month ago
Two US Lottery jackpots this week are worth a combined $980 million! Here's how you can play from Ireland
1 month ago
Dwayne 'The Rock' Johnson responds to being named Most Likeable Person in the World
1 month ago
McDonald’s to keep drive-thrus open and maintain delivery service during lockdown
Next Page