Oisin is looking for a sporty girl who will play GAA with him.

A young man from Belfast has been ranked as one of Tinder's seven most successful UK singles.

According to the dating app, 19-year-old university student and lifeguard Oisin is one of seven singles who have been turning heads this summer on Tinder’s Swipe Island. 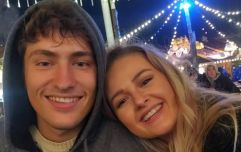 END_OF_DOCUMENT_TOKEN_TO_BE_REPLACED

For those out of the loop, Swipe Island was launched two months ago to coincide with Love Island and is an event experience appearing on the dating app in bursts throughout June and August.

"Singletons looking for a (holiday) romance can be transported to their very own virtual “Casa Amor” to couple up without any of dramz of the real villa," Tinder says.

Asked what turns his head when using Tinder, Oisin said: “I’m looking for a girl who is sporty and shares my passion for working out. I play Gaelic Football for my club and county and want someone who’s going to cheer me on from the sidelines, or even kick the ball with me.

"It’s also really important to me that my match is modest and down to earth - arrogance is definitely a turnoff!”

END_OF_DOCUMENT_TOKEN_TO_BE_REPLACED

In terms of advice for getting noticed on Tinder, he said: “My top tip would be to open the conversation with a GIF or your best joke, to kick things off on the right foot.

"I also reckon that showing off your hobbies and interests in your photos gives your match something to chat with you about and know straight away if you’ll have things in common.”

The other six people chosen as being the UK's most successful singles include two primary school teachers, a radiographer and a podcaster.

To coincide with the final of Love Island, Tinder users are encouraged to head over to Swipe Island for their chance to bag a date with one of these most successful singles.

The final ever Swipe Island will be live in the Tinder app on Monday, 23 August from 8-10pm in line with the final episode of Love Island.

popular
Netflix has just added 12 very big movies to their library
5 years ago, Hollywood took a massive gamble on a huge sequel... and lost big time
One of the most underrated crime thrillers of recent years is among the movies on TV tonight
‘Older’ woman who took Prince Harry’s virginity gives her side of the story
Netflix backtracks on anti-password sharing measures following user outcry
The JOE Friday Pub Quiz: Week 332
QUIZ: JOE's Big News Of The Day Quiz #40
You may also like
11 months ago
Tinder Swindler now has a legit job making $30K in three days
1 year ago
WATCH: Netflix's new documentary dives into the dark side of Tinder
1 year ago
Irish Tinder users to get "free super like" for sharing vaccine badges as HSE partners with dating apps
1 year ago
Blackmailers are targeting Irish people on dating apps
3 years ago
Four Irish entries in Cosmopolitan's top 30 most swiped Tinder accounts in Ireland and the UK
3 years ago
Tinder set to change the dating game for festival season with Festival Mode
Next Page