*Pretends to be shocked*

After the Notre Dame cathedral caught fire in April, several billionaires who held the icon close to their hearts pledged to donate large sums of money to fund its renovation.

The reaction to the fire sparked controversy, with many highlighting the fact that those same billionaires would not offer the same help to other causes, when actual people had died, for example.

Well, it looks like they're not even that keen to actually make those donations to Notre Dame, with a recent report claiming that the billionaire French donors who promised to donate millions to rebuild the cathedral have not yet donated a penny.

Instead, most of the donations have come from individuals through charitable foundations.

“The big donors haven’t paid. Not a cent,” said Andre Finot, senior press official at Notre Dame. “They want to know what exactly their money is being spent on and if they agree to it before they hand it over, and not just to pay employees’ salaries.”

In the aftermath of the fire, many of France's wealthiest families promised to donate millions to the cause, almost entering a bidding war of generosity. 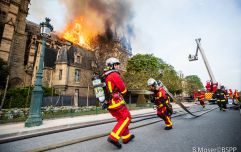 END_OF_DOCUMENT_TOKEN_TO_BE_REPLACED

Bernard Arnault, CEO of luxury giant LVMH that owns Louis Vuitton and Dior, pledged €200 million, as did the Bettencourt Schueller Foundation of the L’Oréal fortune.

But none of that money has been seen yet, according to Finot.

Construction workers have been working day and night to rebuild the cathedral, which has relied on charitable donations from individuals. most of them American and French, rather than benefitting from the hundreds of millions that were previously promised.

“Americans are very generous toward Notre Dame and the monument is very loved in America. Six out of our 11 board members are residents in the U.S.,” said Michel Picaud, president of The Friends of Notre Dame de Paris.


popular
QUIZ: Can you guess the pixellated movie posters?
QUIZ: Can you name all these European countries just from their vowels?
Met Éireann says there's a risk of snow for parts of Ireland this weekend
Here are Ireland’s favourite takeaways, as per the National Takeaway Awards
QUIZ: How well can you remember The Last of Us?
Aldi to recruit 550 new staff and implement living wage rate for employees
Dublin pub to host a 'doggy date night' where you can bring your dog to dinner
You may also like
9 months ago
Hundreds of millions of euro raised already to restore Notre Dame cathedral
9 months ago
Notre-Dame Cathedral in Paris is on fire
2 weeks ago
€350m worth of old punts still unclaimed, say Central Bank
2 weeks ago
Auschwitz Memorial advises "avoiding" The Boy In The Striped Pyjamas
2 weeks ago
Instagram model raises over $500,000 for Australian bush fires by selling nudes
2 weeks ago
DSPCA need forever homes for four puppies abandoned just before Christmas
Next Page