Blindboy on why people feel threatened by Greta Thunberg

"She's the symbol whereby if you want to fight against climate change, you can look to Greta and go - ‘Brilliant, I can focus my energy here'."

Blindboy Boatclub of Rubberbandits fame has a new book out and so we figured it was a good time to sit down for a chat on the best-selling Boulevard Wren and Other Stories and a whole lot more.

One subject in particular that's close to the Limerick man's heart is the nature of climate anxiety, which heavily informed the tone of Boulevard Wren during the writing process.

Recently, Blindboy shared his thoughts that climate action is as important as speaking out about mental health, another fact of life that he has been extremely vocal about to date.

Hurlers, Rugby Players, Soccer Players, whatever. Feel free to give me a shout if ye need directions for expert info. Climate action is as important as speaking out on mental health. It's an emergency level crisis that really needs everyones support.

Upon taking a seat for the JOE cameras, Blindboy was asked about 16-year-old Swedish climate activist Greta Thunberg and the intensely divisive reaction she seems to attract.

In his view, there's a hugely misogynistic element in play when it comes to the especially aggressive commentary that Thunberg draws.

"David Attenborough is saying the exact same shit that Greta Thunberg is saying and he has been saying it for a long time," notes Blindboy.

"When David Attenborough says it, people kind of go, ‘Oh, isn't that lovely? He's the grandfather of the world. Isn't that nice? And he's going to be dead soon and he won't be able to see it. Isn’t that terrible?’

END_OF_DOCUMENT_TOKEN_TO_BE_REPLACED

Blindboy goes on to contrast Thunberg with, of all things, the recent controversy over the newly-established Grafton Quarter sign on Grafton Street in Dublin.

"Some people are getting annoyed saying, ‘Why get annoyed about a sign on Grafton Street that says Grafton Quarter when there's much bigger issues?

"It's because we like to have symbols and that Grafton Quarter sign, even though it's just a sign and it means nothing, that's the symbol that works. It's somewhere to point anger towards much more important things. 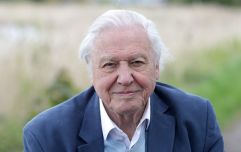 WATCH: David Attenborough tells Greta Thunberg she has "woken up the world"

END_OF_DOCUMENT_TOKEN_TO_BE_REPLACED

"You can now point at a sign that says Grafton quarter, you know? So Greta’s like that. She's the symbol whereby if you want to fight against climate change, you can look to Greta and go - ‘Brilliant, I can focus my energy here.'"

Check out Blindboy's thoughts on the matter in full in the video below, and keep an eye on JOE for a lengthy in-depth chat with the man coming soon...

"But with Greta it gets people intensely angry because people don't like hearing a female speaking up."@Rubberbandits Blindboy on why he's inspired by @GretaThunberg, as others feel threatened by her. pic.twitter.com/IokNJmpkwA