Because there is no easy How To Guide on how to end a friendship.

Breaking up with a girlfriend or boyfriend or friend-with-benefits or whatever is easy.

Well, not easy, but easily definable.

END_OF_DOCUMENT_TOKEN_TO_BE_REPLACED

You were a thing, and now one or both of you don't want to be that thing anymore.

Having a massive argument with a friend, and the friendship ending for that reason, is also something that is compartmentalised, because the friendship is given a full stop for a specific reason.

Friendships ending because of geography, or changing jobs, or as a side-effect from being in a relationship; these are all things we know happen. Sometimes it is sad, but it happens.

However, how do you end a friendship, not because of a fight, or a common cause, but because you just know that the friendship shouldn't exist anymore?

END_OF_DOCUMENT_TOKEN_TO_BE_REPLACED

Breaking up with a friend is tough, especially for some men, because it might feel that having an actual break-up is giving the relationship more emotional weight than you're willing to admit you've invested.

There's also the mentality that you should be friends with this person simply because you have been friends for so long, and that is just how it is. You were friends, you are friends, you will be friends, no matter the actual quality of the friendship.

You could start ghosting the friend. Making plans with no intention of ever following through with them. Replying to texts a few days later with a "Sorry, been up the walls". But the world is too small and life is too short, and you will inevitably end up crossing paths with that person again, and it will be awkward.

No, you should do the right thing, and break up with your friend. 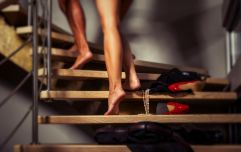 END_OF_DOCUMENT_TOKEN_TO_BE_REPLACED

There doesn't have to be a bad reason. Maybe you just aren't the same person you were when you first embarked on this friendship, and the conversations have run dry, and you both barely get by on fondly remembering the better times you used to have together. "Remember that night, about five years ago when..."

Or maybe it is for a bad reason. There is a balance to be struck by a good friendship, one part hype-man to one part button-pusher, a friendly slagging match with someone you know will be there to improve your mood if you're having a bad day. But if that balance begins to slide more heavily into the slagging side, or if you simply don't like the person you are around them anymore, then you need to put an end to it.

You definitely shouldn't feel bad about breaking up with a friend. It seems weird because it is something that just isn't done enough, but it should be. Over our lives, we have more friends than boyfriends or girlfriends or even family members, so it will fall to reason that some need to be cut from your life, and that deserves as much respect as the ending to any other relationship you might have.

It is important to be respectful (assuming the end of the friendship is a cause that still warrants respect), and tell your mate that your friendship was important to you, because it probably was, otherwise you wouldn't have been mates in the first place.

But if/when that mate makes contact to plan to meet up, you do need to tell them honestly that you don't want to hang out with them anymore. If you tell them your reasons why - you two don't have the craic anymore, or they're too negative to be around anymore, or whatever your reason is - perhaps it will be the wake-up call they'll need to course correct and try to be a better friend.

Maybe you won't want to give them that chance, and that is your prerogative.

But equally likely is that they'll take it badly, and say "Whatever mate" and that will be that. Weeks, months or years of friendship, gone without a fight from their end. But you've done the bigger thing and officially brought an end to something you were no longer happy with, and that is fine.

Breaking up with a mate can be hard, because your lives will probably be entwined with many mutual friends and history that there is a chance they'll never truly be gone from your life.

And that is okay, too. You can nod hello, maybe even exchange quick pleasantries at the pub or a party, but you'll feel better knowing you no longer have to expend any energy on someone you'd simply rather not do that for anymore.

Keep your friends close. And that is it. End of sentence.

popular
HSE urges public to stop using popular e-cigarette
2022 looks like it will finally be Hollywood’s big coming out party
President Michael D. Higgins leads the Late Late line-up this week
QUIZ: Can you name all the US States that contain 8 letters?
Ryanair recruiting for over 100 positions at Dublin Airport
The spiritual successor to Roger Rabbit and 7 more movies and shows to watch this weekend
You may also like
8 months ago
RTÉ is looking for singletons to take part in its new show The Love Experiment
2 years ago
Agony Annabelle: Annabelle answers your questions on love, life and more
3 years ago
Study finds that penis enlargement procedures do not work
3 years ago
There's an exclusive sex party taking place in Dublin this weekend
3 years ago
Irish pharmacy chain is giving away free condoms this week
3 years ago
Couple divorce just three minutes after getting married
Next Page