We imagine Arlene Foster won't be super pleased about this...

The latest ad campaign by the Road To Brexit collective has been released, and it is full of facts and dates and figures and why Brexit is going to be great.

You can check it out here, but see if you can spot what they've left out: 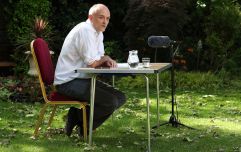 END_OF_DOCUMENT_TOKEN_TO_BE_REPLACED

Did you spot it?

Yep, the Brexit campaign only has six counties to keep an eye on in Northern Ireland, and they've already managed to misplace one of them.

And once it was pointed out the first time, well... you can imagine how the rest of Twitter responded...

A Hard Brexit means Ireland gets Fermanagh back 🤔

Are the Brexiteers cutting loose the Wee North one county at a time?

And whoever draws the best map of the U.K. can make one phone call....DAVIS are you listening? pic.twitter.com/CRdXacOaPe

Fosters left already. And she's taken Fermanagh with her!!!!

Be kind. That would be quite a good map if it had been done by a 5 year old with a crayon and tracing paper. #brexit

Advertisement
House of Rugby Ireland · Quinn Roux on finding a home in Ireland and Mike McCarthy brings the absolute HEAT!
popular
Joe Biden begins presidency with 15 executive orders, some reversing Trump policies
Snow and ice warning issued for seven counties
Xbox reveals full list of exclusive games arriving in 2021
11 arrested at planned protest at the Four Courts
Josepha Madigan apologises for comparisons between reopening of schools and Mother and Baby Homes
Three men arrested following search of "chop shop" in Meath
New year, new you, new career? This opportunity could be right up your street
You may also like
1 week ago
Items posted from Ireland for delivery worldwide in December still in transit, says An Post
1 week ago
DPD pauses deliveries from UK to Ireland due to Brexit
1 week ago
Leave.EU moves its registered domain address to Waterford so it can keep its website
2 weeks ago
Boris Johnson's dad has applied for French citizenship
3 weeks ago
UK and EU finally agree post-Brexit trade deal
1 month ago
Brexit-backing billionaire moves new vehicle production to France
Next Page