Calls are growing for a Katie Taylor statue

Taylor, a native of Bray, became the country's first ever undisputed world champion boxer as she made it a clean sweep of lightweight belts. She's been in the professional game for just two and half years and had 14 wins from her 14 professional fights. 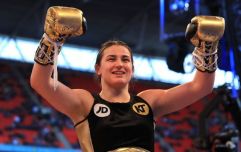 END_OF_DOCUMENT_TOKEN_TO_BE_REPLACED

Though the win over Persoons was not without controversy, there can be no dispute that Taylor is an utterly singular talent and one of Ireland's most spectacular sportspeople.

Calls are now growing for Taylor, who is also a gold medal Olympian, to be honoured with a statue. A petition to have a statue made in her likeness in Bray has picked up over 300 signatures in less than 24 hours. If you want to add your signature to the cause, you can find it here.

Good luck tonight #KatieTaylor . She is one of a kind, and we should be erecting a statue to her soon!!

@LeoVaradkar @PresidentIRL time to put the statue of Katie in the middle of the city & give this exceptional role model the recognition & accolades she deserves -undisputed champion of a sport & done with sheer hard work & determination. If she were a man there would be no issue.

@KatieTaylor you did it!!! This country better have a statue of this lady commissioned. The pride of Ireland and a shining example of an exemplary role model to all. 🇮🇪👏👏👏

popular
Netflix has just added an incredibly tense 97-minute thriller
A county-by-county breakdown of the average rent in Ireland as rent inflation reaches record high
Nearly 100 flights delayed at Dublin Airport on Monday
18 counties hit with weather warning as temperatures set to reach 29 degrees
WhatsApp introduces way to choose who can and can't see you're online
Irish person dies after drowning in Spanish resort swimming pool
QUIZ: Can you get top marks in this short but tricky Irish geography quiz?
You may also like
3 months ago
Katie Taylor describes defeating Serrano as the "best moment" of her career
1 year ago
Eddie Hearn heaps praise on Katie Taylor, calling her "the role model"
2 years ago
Katie Taylor has absolutely no time for KSI and Logan Paul as they headline boxing event
3 years ago
Plans to build a statue of Katie Taylor are gathering pace
3 years ago
Katie Taylor wins fourth professional belt after just two and a half years
3 years ago
Katie is exactly the kind of movie that Notorious should have been
Next Page