Restores your faith in humanity, this.

A man who stole two chocolate bars from a store in Liverpool 43 years ago has graciously returned the money that he owes.

The unknown man took the bars from a branch of Woolworths without paying for them when he was a young boy in 1975.

This week, the manager of Liverpool's Belle Vale shopping centre received a hand-written note from the man, apologising for his actions.

A £5 note was also enclosed.

Restoring our faith in humanity ❤️ Thank you. pic.twitter.com/f9rdXlR1Qf

"Dear Sir, I stole 2 bars of chocolate from Woolworths in your shopping centre in 1975 when I was a little boy.

"I apologize. I didn't know any better. Here's the money I owe you for them." 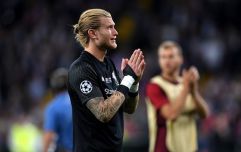 END_OF_DOCUMENT_TOKEN_TO_BE_REPLACED

The contents of the letter were shared on Belle Vale's Twitter page this week. They wrote that the note was "restoring our faith in humanity."

Belle Vale shopping centre told the Liverpool Echo that the money received will be donated to charity.

popular
Woman who died after being mauled to death by eight dogs has been named
Harvard study reveals how many times men should ejaculate each month to stay healthy
Richard Madeley apologises after calling Sam Smith 'he' and bungling guest's pronouns
Omniplex Cinemas are hiring for an awesome and very rare job
James May condemns Jeremy Clarkson for 'creepy' Meghan Markle column
Prime Video has just added one of the best dramas of the last decade
Parents left in shock after gorillas start mating in front of kids at zoo
You may also like
2 months ago
Will Ferrell is looking for someone to put him and his mum up in Liverpool
5 months ago
Nine-year-old girl shot dead in Liverpool
8 months ago
Merseyside police defend ‘exemplary’ Liverpool fans tear gassed by French police
1 year ago
Police issue warning over CCTV footage of Liverpool bomb explosion
1 year ago
Liverpool bomb declared a terrorist attack as police confirm fourth arrest
1 year ago
Liverpool bomb: Taxi driver "locked bomber inside car" after spotting explosives (Report)
Next Page